Salt Marshes are Beautiful, Stinky, and Uncomfortable Places to Work

The marshes that hug the banks of Alabama’s bays and bayous are smaller than some of their Louisiana or Georgia cousins but are no less beautiful. When the sun is setting over the black needlerush, the dominant marsh plant in our neck of the woods, and you can feel the last of the sun’s light begin to fade, I feel very lucky to be able to do the type of research I do. 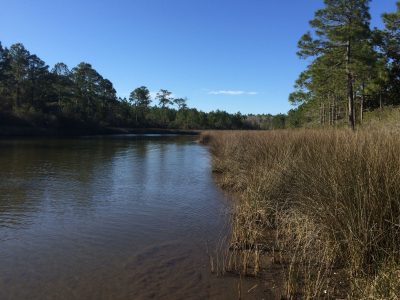 At the same time though, they’re stinky. They’re rotten-egg stinky. We’re talking swamp gas, baby. Earth farts. Salt marshes may look like solid land, but their soils are mostly waterlogged muck that is devoid of oxygen. This lack of oxygen leads to a buildup of hydrogen sulfide, which is itself a byproduct of microorganisms creating energy in an inhospitable environment. You’re tromping through the marsh one minute, but your next step sinks knee-deep into the muck, releasing that lovely rotten-egg smell.

An aquatic ecologist (me) generally experiences entering the salt marsh by first disembarking from the boat. The first step is thigh deep in muck, flooding my rubber boots immediately, until I can gain a firm foothold on the marsh by feebly grasping for plants to pull myself up with. Then, once I can step confidently up onto the marsh surface, I’m poked in the eye by pointy black needlerush that grows along the edge of the marsh. These plants grow taller closer to the water’s edge where the soil is less salty because it is flushed by the daily tide.

A few yards in and the black needlerush plants are no longer at eye height and are instead hand height thanks to the salt that builds up in the soil farther away from the water’s edge. This is fine in the summer, when the plants are green and healthy. In the winter, however, when much of these plants die-back and are no longer green, the sharp tips snap off and cause dozens of black needlerush splinters.

Despite these discomforts, I’m older than most graduate students and I’ve had the opportunity to do a lot of different things in my life – I’ve been an electrician, a line cook, a mechanic, a musician, a shoe salesman just to name a few – but my work in Alabama’s tidal creeks and salt marshes stands out as some of the most fun I’ve had while getting paid.

But beyond the joys and pains of working in tidal creeks and salt marshes, my work is rewarding because the ecosystems in Alabama are so unique and understudied.

In places like Baldwin County, one of Alabama’s fastest growing counties, they drain coastal uplands and connect them with coastal waters. They’re brackish, which means they’re a mix between freshwater and saltwater, and experience daily tides. They’re used by marine fish species as a nursery and as a source of food, thus making them an important part of Alabama’s large fishing industry. They also have been considered “sentinel habitats”, which just means they can show signs of environmental changes before larger bays do. In more developed tidal creeks, this runoff from rainfall can lead to big changes in how salty the water is, and we think this is probably bad for the plants and animals that live there. My research is simply focused on understanding the how’s and why’s.

So, the reason I tromp through salt marshes and tidal creeks, enjoy their beautiful sunsets, inhale their stinky gasses, and put up with getting poked in the eye is because these habitats are important. They’re home to many unique plant and animal species, they support economic and culturally important game fish, and they’re a valuable indicator of environmental health.