“I am a passenger on the spaceship Earth.” ~ Buckminster Fuller

Imagine yourself on the International Space Station (ISS).  You’re up there captivated by views of our beautiful planet, doing experiments, completing assigned tasks, living, and floating weightless.  Hurtling around the world at over 17,000 miles per hour, there is a constant awareness that life up there is tenuous.

In that environment everyone pays careful attention to ISS life support systems.  From NASA: “NASA’s Life Support Systems (LSS) activities develop the capabilities to sustain humans who are living and working in space….   This includes monitoring atmospheric pressure, oxygen levels, waste management, and water supply, as well as fire detection and suppression…. Existing life support systems on the ISS provide oxygen, absorb carbon dioxide, and manage vaporous emissions from the astronauts themselves.” 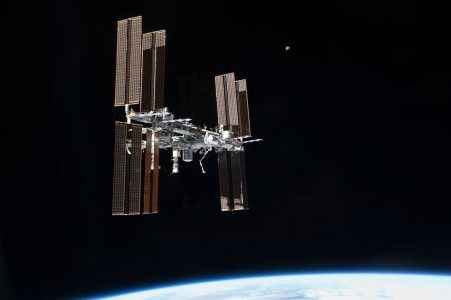 No astronaut would ever take these systems for granted in the harshness of space.  The ISS is so small, its resources so meager, its surroundings so hostile.

If we think about it, the Earth is no different.  That’s why Buckminster Fuller coined the term Spaceship Earth for his 1969 book Operating Manual for Spaceship Earth.  While it’s bigger and appears almost infinitely vast from our perspective on the ground, from a little higher perspective it is obvious just how small, fragile, and vulnerable it is in the life-threatening harshness of its surroundings, and just how finite are its life support systems.

This rarely seen Earth image was taken from the moon lunar orbiter Clementine in 1994, a similar view observed by Apollo astronauts in the 1960s and 1970s.  All 24 Apollo astronauts who went to the moon were sobered by a similar view.  It was painfully obvious just how small, lonely, and unprotected Earth is.  They were also inspired and humbled by its stunning beauty and preciousness.  Even from low Earth orbit the lesson is clear.  Space shuttle astronaut Ron Garan explains: “When we look down at the Earth from space we see this amazing, indescribably beautiful planet.  It looks like a living, breathing organism.  But it also at the same time looks extremely fragile.”

The most distant perspective of Earth ever recorded is an image taken from the Voyager 1 spacecraft in 1990 at almost 4 billion miles distant.  From that distance our planet is a mere point of light that according to NASA was only 0.12 pixel in size.  Viewing that image, astronomer Carl Sagan dubbed Earth a “pale blue dot,” and “a mote of dust suspended on a sunbeam.” 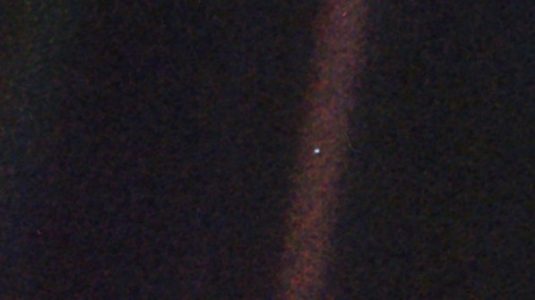 On a cosmic scale, our planet is as insignificant and limited as the ISS, albeit teeming with beauty and life.

Yet we humans treat this pale blue dot as if it is boundless and impregnable, an infinite source of resources and an infinite sink for our wastes.  We are behaving as a species – particularly those of us in the industrialized world – like inattentive and irresponsible astronauts who are shockingly cavalier about the life generating and life supporting systems of our spacecraft.

Keep this up and this whole thing is going to end badly for Homo sapiens and a lot of other species.  In fact, thanks to human behavior things have already ended badly for a lot of species that humans have driven to extinction.  “A lot” is an understatement.  Humans are causing what is being called the sixth mass extinction of species in the history of life on Earth.

Spaceship Earth’s ultimate life support system, the place where life began, is the blue in Carl Sagan’s pale blue dot, the ocean, the subject of SDG 14: Life Below Water.

From the SDG 14 webpage: “The ocean drives global systems that make the Earth habitable for humankind. Our rainwater, drinking water, weather, climate, coastlines, much of our food, and even the oxygen in the air we breathe, are all ultimately provided and regulated by the sea.”

Imagine how astronauts on a deep space voyage in a craft that mimics Earth’s planetary system would panic if they learned the following about the water system of their spacecraft, a system designed to do all the things listed above.  And imagine that it dawned on them that they were responsible.

Some people have been paying attention and working lifetimes to change this.  One of these heroes for our time is marine biologist, aquanaut, and Spaceship Earth astronaut Dr. Sylvia Earle.  Dr. Earle has been called “Her Deepness” for her extraordinary efforts over more than a half century on behalf of the ocean.  She summarizes the importance of the ocean in eight words: “No water, no life.  No blue, no green,” and she has declared the ocean the Earth’s “ultimate life support system.”

Dr. Earle founded Mission Blue, an organization that “inspires action to explore and protect the ocean.”  Mission Blue is organizing a global coalition to build public support for a network of marine protected areas, dubbed Hope Spots, places identified as critically important to the health of the ocean.

Note: the most important words above are “public support.”  The operating assumption (with which I agree) is that organized people demanding action and holding elected officials accountable can turn the tide.  Mission Blue invests a lot of time and resources in this effort.  An engaged, informed and action-oriented public demanding policy change on behalf of our planetary LSS will be the driver of success.

We have it in us.  As Dr. Earle advises: “Hold up a mirror and ask yourself what you are capable of doing, and what you really care about?  Then take the initiative – don’t wait for someone else to ask you to act.”

It was Carl Sagan’s idea to turn Voyager 1 around to take one last photograph of Earth as Voyager 1 was leaving the solar system.   Here is Sagan’s beautifully rendered reflection on that pixel of Spaceship Earth, which was part of the original thirteen-part Cosmos television series in 1980.

This is how it ends: “It has been said that astronomy is a humbling and character-building experience. There is perhaps no better demonstration of the folly of human conceits than this distant image of our tiny world. To me, it underscores our responsibility to deal more kindly with one another, and to preserve and cherish the pale blue dot, the only home we’ve ever known.”