It is hard to imagine that the beautiful planet that we call home is 71% water. As humans, we occupy the land that only takes up around 20%. It can be easy to disregard the ocean and only focus on our stretch of land, but that would be a mistake. We humans rely on water systems for our livelihoods, which is why Sustainable Development Goal (SDG) 14: Life Below Water is so important. Here at Auburn University, Dr. Anthony Moss is researching organisms that significantly affect our oceans.

Dr. Moss first came to Auburn University in 1992, when he joined the Zoology and Wildlife Sciences Department in the College of Science and Mathematics (COSAM), now the Biological Sciences Department. Dr. Moss teaches biology (Principles, Advanced Cell Biology, Biology of Marine Systems and Plankton Biology at DISL in the summer) and is the Marine Biology coordinator.  Dr. Moss studied the neural regulation of ciliary movement in the ctenophore Pleurobrachia pileus while working with his PhD. advisor, Dr. Sidney Tamm, of Boston University at the Marine Biological Laboratory (MBL) in Woods Hole, Massachusetts. The MBL is the home of marine biology and neurophysiology in the United States.  Upon completion of his PhD, he went on to study the biochemistry of ciliary motion with Dr. George Witman at the Worcester Foundation for Experimental Biology (now part of Univ. Massachusetts Medical Center). In 2007 and 2008 and again this past summer, Dr. Moss returned to the MBL as a Whitman Fellow to study Mnemiopsis leidyi.  He studied the structure and neurobiology of the statocyst, a sensory organ that provides gravity sensation. The MBL is a great place for such studies, because there are a lot of other scientists at the MBL who also work on the neurophysiology of marine invertebrate organisms. Now, why would Dr. Moss put so much focus on this organism with a weird name? It’s because they are very ancient and have unique sensory mechanisms. 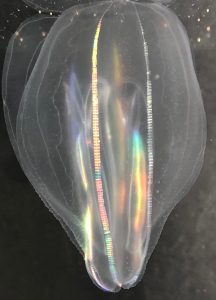 The Mnemiopsis showing off its vibrant colors

In all animals, gravity sensation is critical for survival. This is one of the most important sensory functions that animals have. Without this sense, animals would not know what is up from down, and in a three-dimensional environment such as the ocean, animals might not know where to go to find food, where to go to flee to hide from danger, or even find mates. Dr. Moss is interested in Mnemiopsis and its gravity-sensing organ for several reasons. Firstly, although we understand what the organ is doing, we do not understand how it transduces, i.e., converts the gravity information to electrical and nervous activity. Ctenophores are very strange in that they have only one gravity sensing organ in each animal. Why is this strange? All other organisms have gravity sensing organs, and they always have at least two; this is true from insects to humans. Even other marine organisms have at least two; some jellyfish have as many as 32!

Mnemiopsis and other ctenophores have done what would seem very strange and unlikely: they collect all their gravity sensation information in a single ‘statocyst’, which is the geosensory organ in ctenophores. This structure in turn contains a single statolith (i.e., stone) made up of hundreds of tiny lithocytes, or ‘stone cells,’ packed tightly together. Dr. Moss discovered that Mnemiopsis leidyi  have a strange chemical composition to their lithocytes. All biologically produced gravity sensing ‘stony’ components are made of calcium combined with either phosphate or carbonate. But research has shown that the statocyst ‘stone cells’ in ctenophores have an entirely different elemental composition from the stony structures made by other animals. Recent molecular analyses by other scientists have indicated that ctenophores arise from an extremely ancient origin and could be representative of the first multicellular organisms. These studies indicate that ctenophore statocysts have a completely different biochemistry and physiology when compared to similar structures in other animals. It may be that the ancient origin of ctenophores may have placed them in oceans that were chemically vastly different from today’s oceans.

Zoomed in image of a statocyst

Studies by Dr. Moss and his students have shown that Mnemiopsis is able to tolerate low oxygen environment that can very negatively impact other organisms. This observation, along with the strange elemental composition of the statocyst, might arise from the extremely ancient oceans that were the original home of the predecessors of all ctenophores. Mnemiopsis could have a great advantage when it comes to increased ocean acidification and tolerance of lowered oxygen concentrations because of increased carbon dioxide emissions. These characteristics are part of the reason that Mnemiopsis is such an incredibly invasive species. Wherever Mnemiopsis travel outside of the Americas, they are an added stress to ocean systems already under threat of acidification and lowered oxygen due to human-originated pollution and climate change-induced deoxygenation. Dr. Moss stated that for these reasons, it is utterly critical to keep this animal away from the Pacific Ocean, where, so far, it has not been found.

Today these organisms are thriving in the ocean from the east coast of the United States to the Caspian and Black Seas. This impacts sustainability in two ways. First, Mnemiopsis are an incredibly invasive species. They are extremely adaptive and interrupt the food chains of many important species. Regions that depend heavily on fishing have been negatively impacted by the presence of Mnemiopsis, as they can eat fish at many life stages and the food that the fish consume. Second, these animals can thrive in a calcium-less ocean which comes as a result of ocean acidification when there are increased carbon dioxide emissions. Many staple species that humans use for food are not as resilient to these ocean changes, so Mnemiopsis has an advantage when it comes to increased ocean acidification. Mnemiopsis are an added stress to ocean systems under threat of acidification, and Dr. Moss stated that it is important to keep this macroscopic animal away from the Pacific Ocean.

At Auburn, Dr. Moss enjoys working with colleagues from many diverse backgrounds with a wide diversity of skill sets. He believes that there are a lot of people with innovative ideas, and he enjoys the culture of collaboration at Auburn. Within his department, faculty try to keep a global viewpoint to interact more effectively with other faculty across the University. He says that Auburn is constantly diversifying its skill base and the university is growing in a healthy way. It is a more diverse and interactive place than when he arrived over 25 years ago and he believes that the future is bright. He is learning something new every day and learning from his students, who strive to prove him wrong – this keeps things fresh and moving forward. His students teach him every day how to be a more effective communicator, something rarely cultivated in more strict research lab environments.