Spectrum, Auburn University’s LGBTQ+ and straight alliance, was founded in 1990. Since then, it has striven to become an inclusive and safe space for Auburn’s LGBTQ+ community, as well as for allies. This organization hosts a variety of meeting and events that center around two main elements: community and education. 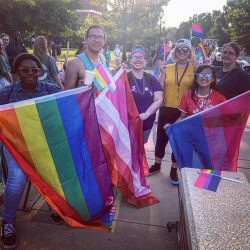 Some of Spectrum’s meetings are meant for socializing and building community. Earlier this semester, Spectrum hosted a meeting where they all painted as a group, and they are also hoping to have a Spectrum Friendsgiving this semester. Arguably their largest events, Spectrum also hosts a Fall Formal and Pride Prom. These dances provide Spectrum members an opportunity to connect and celebrate as a community. JVO, Spectrum’s Multimedia Chair, describes the significance of these formal events.

“We know a lot of people in our organization weren’t able to experience those things in high school…because of the way they wanted to express themselves with how they dress or who they wanted to go with, so we wanted to create and experience that isn’t trying to replace it but is an equivalent to it that lets you be exactly who you want to be”

In addition to these community-oriented events, Spectrum is really intentional about creating space for educational meetings. These meetings often center around discussing important and difficult topics, such as racism, prejudice, and bias. In these meetings, they try to maintain a balance between discussing how the LGBTQ+ community is affected by these topics and how the LGBTQ+ community can also facilitate these issues. In so doing, Spectrum hopes to ensure that its members are able to recognize and combat any internalized biases they may hold.

When asked her thoughts about what Spectrum hopes to provide its members, Heather Mann, Spectrum’s President and long-time member answered,

When discussing these resources, Heather elaborated that the Med Clinic cannot give individuals new prescriptions for hormones and are only able to refill preexisting prescriptions. To initially get a prescription requires seeing an endocrinologist, and even then, it can be difficult to go through the referral process and find an endocrinologist willing to work alongside an individual for the transition process. Heather also mentioned that some members had driven into Tennessee in order to secure a hormone prescription. Although the Med Clinic is unable to aid individuals in transitioning, Spectrum has a positive relationship with the clinic.

“We actually have a really good relationship with people in the Med Clinic. Dr. Cam, in past years, would always come and speak for our sex ed and AIDS awareness meeting. He was so happy to do that this year, though he was probably swamped at the clinic. The Nurse Practitioner Skylar Moore was very wonderful to work with last year, very friendly, always asking ‘what can the med clinic do to make the LGBTQ+ community feel more comfortable?’“

Skylar Moore has been intentional about making sure Spectrum and other LGBTQ+ individuals know that she is a safe space for them to come with their medical concerns. After speaking with Spectrum, she gave her number to the members and let them know to come directly to her if they needed medical attention. JVO comments that this had a great impact on Spectrum members. It let people know that even in a space that has often been associated with LGBTQ+ discrimination, there was somebody in their corner looking out for them.

Spectrum, at its core, is a close-knit group of individuals seeking acceptance, community, and celebration. Devoted to self-betterment and improvement, Spectrum looks towards critical conversations and community events as a way to foster an inclusive and fair environment. In making this safe space, individuals can enjoy themselves and celebrate their unique identities. JVO, when reflecting on their experience in Spectrum, summarizes it best: “Having a place like Spectrum is being able to know right off the bat that you have people who will support you.”