In the past several years, the idea of sustainability has been gaining attention through different movements and events, often promoted by news articles or television broadcasts. However, sustainability is so much more than just a buzzword seen in the news. Sustainability encompasses the four main areas of nature, economy, society, and wellbeing, and its applications are countless in that it can be applied to all aspects of our daily lives. Chandana Mitra serves as a great example of an individual who, by focusing on sustainability, makes a positive impact on the world around her. Chandana demonstrates devotion to sustainability through her personal life history that influenced her career choice, teaching and research focus, and community outreach. 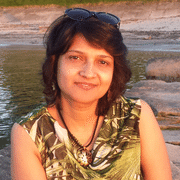 Chandana soaking up the great outdoors.

Chandana grew up in Kolkata, India, a large city with a population of over 14 million people. She attended school in India earning a B.A and M.A. in Geography from the University of Calcutta. Chandana then moved to the United States, where she attended the University of Georgia to earn her Ph.D. in Geography. Being from such a large city prompted Chandana’s interest in urban life, but it wasn’t until her time at UGA that she realized how vast the differences in urban processes were between developing and developed countries. During this time Chandana also connected the causes and effects of climate change to city life, which became a main focus for her later work.

Currently, Chandana works as an assistant professor with the Geosciences Department at Auburn, where she teaches courses related to urban growth, geographic information systems (GIS), and climate science. In her classes, Chandana teaches about common problems faced by growing cities, such as those related to pollution, community demographics, and availability of clean water. She takes her lessons a step further by having groups of students develop solutions and strategies to fix the existing problems. Through her work as an educator, Chandana hopes to help students understand the importance of sustainability and to make it an integral part of their own lifestyles. One of her favorite classroom tools is the online ecological footprint quiz, in which an individual’s impact on the world is estimated based on their current lifestyle. Taking the quiz based on her lifestyle in India versus her lifestyle in the United States helped Chandana realize how different our ecological impact is based on where we live; a lesson she hopes to pass on to her students.

Outside of teaching, Chandana’s involvement with many different research projects all focus on some aspect of sustainability, climate change, and urban areas. A main topic she studies is the urban heat island effect, a phenomenon causing higher temperatures in cities compared to surrounding areas. Urban growth and city expansion by design typically use more concrete, a material that traps heat, intensifies the urban heat island effect causing cities to face effects of temperature change.

However, Chandana stresses that urban growth can be made more sustainable through initiatives such as using green roofs for buildings and planting more trees to mitigate the urban heat island effect. Chandana’s research also looks at how the United States faces much different problems than those experienced in developing countries, such as India, because of dissimilarities in social, economic, and political structure from country to country and climate to climate. While the issues associated with sustainability are definitely seen on a global issue, often they must be narrowed down to a more local scale to solve problems more effectively and make changes more efficiently.

One local research project currently being worked on by Chandana is creation of “Urban Sustainability Maps” for the Auburn/Opelika area.  Her work with graduate students Austin Bush and Seth Greer uses remote sensing and GIS technology to gather data from surrounding areas in order to build maps. The plan is for a practical use of these map layers showing better storm water management through rainwater harvesting, improved efficiency of solar panel installations, and reduced energy usage of buildings based on geographic location. In the future, they hope to make interactive maps available for the community so people can see what changes can be made by their own household to improve sustainability.

Sustainability does have its challenges, one being lack of communication between educators and community members. It can be difficult to work towards improving sustainability when many people don’t truly understand the meaning of the word. Chandana believes the job of an educator is to not only teach students new material, but to make them excited to talk about what they learn and motivated to make changes. This mentality helped in her recent work towards improving mass communication through better sustainability-related education. Specifically, Chandana helped develop modules on climate change and sustainability to be used by K12 teachers to engage their young students on the topic. She hopes these lessons will make students realize they can make a positive impact on the future by improving the world around them.

Chandana understands the great impact individuals can have by making deliberate choices to live more sustainability. She encourages people to start small with actions such as carpooling, unplugging appliances when not being used, and shopping at farmers markets or other local grocery options. These individual actions add up quickly when performed by everyone in the community.

Chandana’s outstanding example of living her life rooted in sustainability and striving to share her passion with others can serve as a model for those of us looking to improve our own commitment to sustainability. Through both her personal interests and her roles teaching and doing research as a faculty member at Auburn, Chandana’s example shows how motivated individuals in our community are making positive impacts every day.