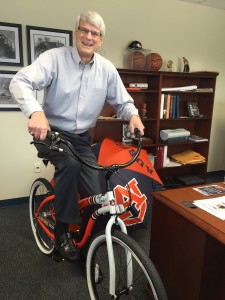 When Don Andrae, Auburn University Director of Parking Services, graduated from Columbus State University in computer science in 1970 there were no computer systems that could guarantee you a parking spot while reducing carbon emissions. Don may not have envisioned this software in 1970, but he did have an open mind for new ideas, an eye for talent in people, and determination for progress.

Today we live in a technological age that has allows us to live our daily lives at a faster pace. We want to get where we’re going now, instead of later. Arriving at our destinations faster often times means taking a mode of transportation that has environmental costs. Is it possible for us to get to our destinations just as quickly while being mindful of sustainability?

Don believes the answer is yes, and to support this he creates transportation programs that utilize technology to deliver us to our destinations in a way that is both logistically faster and reduces the negative impacts transportation has on the environment.

Before Don joined the Auburn family, he served as the Director of Administrative Computing for Columbus State University. There he met a colleague who had developed a computer system for parking services that could be used in cities and on university campuses to assign parking spots.

According to Don, this is when sustainability came into his focus. He noticed that logistic efficiency and sustainability were co-dependent in the system and each benefited the other. Keeping cars off the road makes parking more accessible and reduces carbon emissions and other pollutants in the environment.

Don encouraged his colleague to start a business with the idea. He later became vice president of the company, and implemented the sustainable system for 150 clients across the United States.

Four years ago when Don joined the Auburn family, he found ways to incorporate sustainability into parking services with the creation of programs, such as the Random Drawing Permit System, Enterprise car share, Zimride ride share, and War Eagle Bike Share.

The Random Drawing Permit System for students ensures everyone with a permit has a guaranteed spot to park in their respective parking zone on campus. This method, along with Zimride, has encouraged carpooling initiatives that lower carbon emissions.

The War Eagle Bike Share is the latest program Don has engineered at Auburn, and is expected to be operational in October. Using a mobile app, students can locate the 75 shared bikes across campus, which enhances the convenience of traveling on campus, improves air quality, and benefits student health.

According to Don, where we’re going logistically can also determine where the world goes environmentally, and through technology we can improve both.

“Where we were 40 years ago environmentally and where we are now has been greatly affected by technology. This can be seen as a positive thing because computer systems make our transportation programs possible.”

As someone who strives for progress, Don believes there is always a way to do things differently, and we should be seeking solutions that give back to our environment rather than taking from it.