A sophomore in Neuroscience and Biochemical Studies, Lauren Lavender is the first individual to act as the Director of Sustainability in Student Government Association (SGA). This position is a result of student surveys collected by SGA that indicated Auburn’s students have a significant interest in sustainability issues. Upon collecting this information, SGA decided that to truly represent Auburn’s campus, they needed a spokesperson for sustainability. After applying for other leadership positions within SGA, Lavender was approached about becoming the Director of Sustainability. Already interested in sustainability, she heartily accepted. 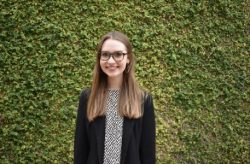 Lavender had only recently begun to invest in educating herself on sustainability issues. Chuckling, Lavender remarked, “There was a time I didn’t really know what sustainability meant, besides recycling.” However, under unusual circumstances, she began expanding her awareness. While undergoing surgery at the Mayo Clinic, Lavender grabbed a random magazine to kill some time. She read an article about the effects that fossil fuels have on the environment, specifically in relation to climate change. For her, it was a wake-up call. After reading that article, Lavender sought out ways to integrate sustainable living into her everyday life.

Lavender’s overall vision for her work with SGA is to facilitate positive educational experiences for students wherein they can find feasible ways to integrate sustainability into their everyday lifestyle. “We would love to have an event where we show people how to live a more sustainable life through small, everyday changes. The idea isn’t to make everyone this zero-waste beacon of sustainability; it’s to show people how to make feasible changes.” In this way, her approach is pragmatic; focusing on individual issues gives students the chance to exercise power where they have control. In this same vein, accessible and empowering introductions to sustainability, such as using reusable utensils and bottles, is a great segway into a deepening interest in sustainability issues in the long-term.

Bursting with energy, Lavender laments how COVID-19 has impacted her ability to implement certain projects and initiatives. “I have gotten – not a no – but a ‘yes, when’ answer from all the people I am contacting. The biggest obstacle we have is timing.” In this vein, Lavender is working on the backend to ensure her initiatives can start quickly and efficiently once campus can resume typical operations. She is pursuing partnerships with several on-campus entities, such as the Student Center, Tiger Dining, and the Nutritional Resource Center.

In the long-term, Lavender has a vision for Auburn’s campus. She has a steadfast belief that students will be the true enactors of sustainable change. Lavender hopes that, in the future, SGA’s Director of Sustainability will voice students’ concerns and demands for sustainable practices, and that Auburn will be known not only for its football team but for its united body of student advocates.