Post contributed by Brandy Ezelle, Traffic Engineer and Bicycle Coordinator for the City of Auburn

When most people think about transportation, they think of cars and trucks, and maybe even trains and planes. Unfortunately, they don’t often consider the non-motorized modes of walking and bicycling as valid forms of transportation. The City of Auburn is working to change that. 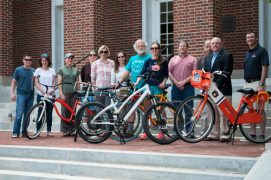 A group of citizens gather with Mayor Ham in recognition of Bike Month.

The City of Auburn has been designated a Bicycle Friendly Community by the League of American Bicyclists since 2000.  This distinction is due in part to our network of more than 35 miles of dedicated bicycle facilities. Although our bicycle network is still under construction, you can navigate to almost anywhere in town utilizing bicycle facilities and low-speed, low-volume roads or sidewalks.

There are many benefits that make walking and bicycling a rewarding way to travel.  You can improve your health, reduce traffic congestion, minimize your carbon footprint, and save money all at the same time. For me personally, the most significant benefit is improved health.

I’ve always been an active person, but with a family, a full-time job, and other commitments, it’s difficult to find the time for exercise. My five-and- a-half mile commute to work typically takes 15 minutes by car.  By bike, it takes only 10 extra minutes.  By riding my bicycle to work and from work, I get 50 minutes of cardiovascular exercise while only taking 20 minutes out of my normal routine. Incorporating exercise into my daily commute actually frees up time I can spend with my family instead of at the gym.

Even so, making the decision to commute by bicycle is a daunting prospect for many. They see and recognize the benefits, but just can’t figure out how to get started. Fortunately, there are opportunities in Auburn to help you make the shift from four wheels to two.

For people who do not own a bicycle, you can borrow a bike from the City absolutely free and use it as your own. You can even take it on some of the weekly group rides to become better acquainted with Auburn’s streets and where to ride. Once you’re ready to challenge yourself, use the City’s Bicycle Routing Tool to help determine your best route. As a cyclist, you don’t always follow the same routes that you would by car because you may want to utilize bicycle facilities, bypass high-speed roads, avoid traffic, or maybe just steer clear that big hill! This September, the War Eagle Bike Share currently used on campus will be expanded throughout the City of Auburn, giving you even more free ways to travel by bicycle.

Do you know your #IntersectionInteractions?

Safety is one of the most significant concerns for many would-be commuters.  The City of Auburn and Auburn University work together to educate all road users through the joint initiative Travel With Care.  Each year, this transportation safety campaign addresses common transportation issues that cause the most accidents.  This year’s campaign concentrates on smart, safe #IntersectionInteractions and will take place September 8-15. Between cars, bicyclists and pedestrians, staking your claim on the street is an ongoing battle. But it shouldn’t be. Instead of focusing on what other people should do, know what YOU need to do to be a responsible traveler.

Auburn is a great place to call home. Compared to bigger cities like Birmingham, Atlanta, or New Orleans, our streets are safe and navigable for all modes of transportation. So next time you think about going to the park, campus, or downtown to eat or shop, consider taking a walk or ride. It may take an extra five or ten minutes, but think about the impact that choice can have on your wellbeing, including the reduced stress of fighting traffic jams and parking problems. Live it up, enjoy life, and take a walk or ride to your destination.