In July 2016, it was reported (WSFA-TV) that a solar photovoltaic generation facility was being developed in nearby Macon Co., AL.   The plant will generate 10 MW on an 80-acre site.  Soon after that announcement, in September 2016, the Opelika-Auburn News announced that another, much larger solar farm was being developed in Chambers Co, AL, expected to have an output of 72 MW on an 1100-acre tract of land.  It is refreshing to see solar photovoltaics finally coming to the state of Alabama. 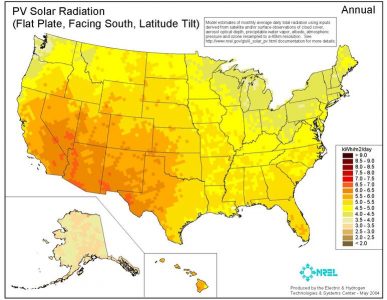 Research by the National Renewable Energy Laboratory shows the potential kWh in solar pv across the country.

Solar resources are not as plentiful in Alabama as they are in the desert Southwest.  However, it is clear from the image of the monthly average daily total radiation shown to the right provided by the U. S. Department of Energy’s National Renewable Energy Laboratory (NREL), that sunlight is more abundant here than in locations along the eastern seaboard.  That is relevant because solar development in states like Pennsylvania and New York outpace those in the Southeast.  The numbers on the bar diagram translate into the average number of sunlight hours per day at an incident solar radiation (insolation) of one sun (1000 Watts per square meter).

Germany, driven by its Energiewiende policy, has made great strides in increasing the fraction of energy consumption that is delivered from solar generation.   It is interesting to note that even the northernmost location in the state of Alabama receives more incident solar radiation that the southernmost location in Germany.

Southern Power, the renewable energy subsidiary of Southern Company has started building  a substantial portfolio of recently acquired green generation capability including wind, solar and biofuel resources.  The solar facilities are located in States such as Nevada, California, and a smaller generation facility in North Carolina.  The largest of these facilities is the 139 MW photovoltaic plant at Campo Verde in Imperial Co., CA, that has been in operation for over three years.  The State of Florida has also launched a significant push towards adding solar generation capability.  Three new solar power plants owned by Florida Power and Light/Nextera, each rated at about 75 MW, will be brought on-line in the next few months.

The transition from conventional, fossil-fuel power generation has to be a gradual process, driven by the local economics of the region.  California, driven by its higher cost of energy generation and progressive state government policies favorable towards renewable energy deployment, has been a leader in adding solar energy generation.  Locales that have a low cost of electricity generation will, obviously, be the last to initiate the transition.  It is reassuring to see that most relevant players in the field nationwide now consider solar photovoltaic technologies to be mature enough to start taking the first few steps on the road to deploying large-scale renewable resources.