The Importance of Biodiversity and Organic Food Production

By adminJanuary 6, 2017No Comments

Home » Blog » The Importance of Biodiversity and Organic Food Production

I’d like to begin by taking you back to a different time, a time before refrigeration and food transportation. It wasn’t that long ago, really. As recently as the early 1900s all food that was consumed was produced locally. People within communities would produce different things, and trade amongst themselves to have a variety in their diet. But over the course of a century, things have changed dramatically. Most people have no idea where their food comes from, whether they get the majority of it from the grocery store, or from fast food restaurants, it is all produced on a large scale by major corporations. This type of food production is not only unnatural, but it is unsustainable as well, for our bodies and our environment.

In spite of this change, I think that many people in my generation still remember gardening with their grandparents. Even if it was a small urban garden, most of our grandparents continued the tradition of producing some of their own food. They understood plants, the soil, and their climate enough to produce seasonal produce to supplement their diets. People will tell you that genetically modifying plants, and mono-cropping hundreds of acres of the same plant are the things necessary to feed a growing population around the world. But the fact that they ignore is that mono-cropping has led to things in history like the Dust Bowl in America, and the Irish Potato Famine. In Ireland, people had discovered the nutritious potato, and ease with which it grew, and everyone was growing it as their main food source. All it took was a bad case of late blight (a fungal disease that destroys potatoes) one season to wipe out all of the potatoes, and therefore the majority of the food supply. 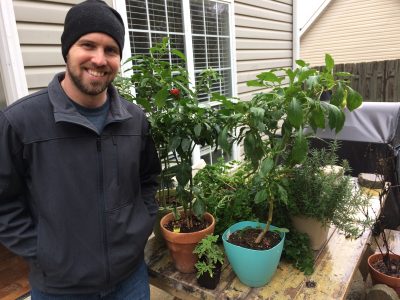 Jonathan with a selection of edible plants.

Here in America, the Dust Bowl was caused by mono-cropping and soil erosion. Farmers had tilled thousands of acres of the great plains, destroying the native grasses which had been preventing soil erosion and holding moisture for thousands of years. With the native crops gone, the grains harvested, and a lack of rain, the soil began turning to dust. These people did not know what was causing this, it was done out of ignorance. Farmers believed that they were doing the right thing, to produce food for large amounts of people, much like what is taking place today. However, I do believe we know that what is being done now is not the best way to do things. The driving force behind today’s food production is not the desire to feed people, it is the desire for money, and if you are able to copyright seeds, forcing farmers to buy more each season, and produce chemicals that are designed specifically for your seeds, then you are creating a source of endless income. These two events alone affected millions of people, causing mass migration and starvation. And I believe that as long as large numbers of people are dependent on much smaller groups for their food, there continues to be a major risk for famine.

So then, what is the answer? I believe that the key to food security in the future, is once again localizing food production, and teaching people what real food is and how to prepare it.  That is one of the major reasons that I have spent the fall semester building a student organization whose sole purpose is to grow food, educate, and feed people. Connecting people back to the true source of food, and empowering them to produce it themselves. The organization is called the Organic Garden Club. If you are interested in being a part, you can find us on the student involvement website, our Facebook page: Organic Garden Club at Auburn University, or by emailing me at: jrl0052@auburn.edu