The 2017 Sustainability Picnic Gives Food, Games, and Prizes Without Leaving Behind Waste 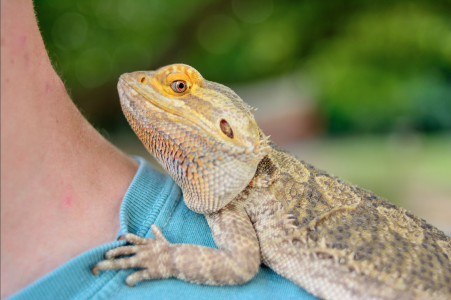 Creatures of all shapes and sizes enjoyed the festivities.

Auburn students, employees, community members, dogs, and reptiles gathered around a grassy clearing in the Davis Arboretum August 23 to kick the fall semester off with the 5th annual Sustainability Picnic.

After the sky cleared up on that rainy Wednesday afternoon, the Sustainability Picnic enticed the community to come outside for games, live music, and food. The event encouraged people to learn more about sustainability-related opportunities in the Auburn community by visiting the colorful booths that surrounded the space.

Interns with Auburn’s Office of Sustainability offered guests a bingo card, which they completed by visiting the tables and learning about each organization. A sleek, orange and white bike donated by Parking Services enticed guests to play the game for an opportunity to win. Players received up to three raffle tickets for every bingo they filled on their cards, but only those who “blacked out” their cards by visiting all of the organizations listed were entered to win the grand prize bike.

While guests won gift cards, t-shirts, coffee beans and other prizes in the drawing, they also picked up blue frisbees, turn them upside-down, and use them as plates for dinner. Over 350 attendees lined up to scoop some of Tiger Dining’s vegetarian options onto their frisbee-turned plate. 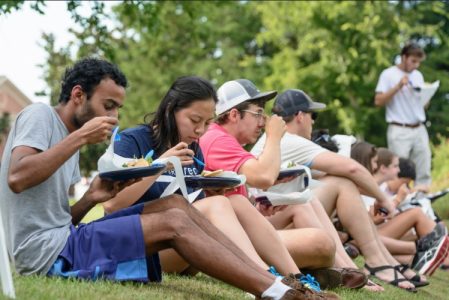 After dinner, guests had the option of keeping the plate and silverware or giving it back to be washed and reused later. If food or paper remained on the plate, the attendees walked to one of the two waste stations to separate the remains into recycling or compost bins. However, there were no trash cans to be found in order to meet the event’s “no-waste” goal.

At the event’s end, the time came to announce the winner of the bike. Although the other door prizes stole the picnickers’ hearts as well, those who excelled at the bingo game waited in anticipation for this moment. A sustainability intern stood at the mic and fished through a basket of about 20 blacked-out bingo cards before finally calling out the winner’s name. This announcement was met with a squeal as the new bike owner ran through the crowd to accept her prize.

As people began to filter out of the arboretum, the remaining plates and silverware were either placed in one of the bins at the waste station or carried home with the guests to be used again later. After everything was sorted into recycling, compost, and things to be washed and reused, only .2 pounds of trash remained.

Although people thanked those working in Auburn’s Office of Sustainability for the successful event, it was made possible with the help of co-sponsors: Tiger Dining, the Waste Reduction and Recycling Department, the Donald E. Davis Arboretum, Academic Sustainability Programs, and the Natural Resources Management Degree.

Hope to see you next year at the Sustainability picnic!