A little more than a year ago, a student group focused on organic gardening at Auburn was nonexistent. However, now the established Organic Garden Club meets regularly at the Community Garden to prepare, plant, grow, and harvest a variety of crops. The remarkable progress made in only one year is due in large part to the hard work and dedication of Jonathan Lillebo. 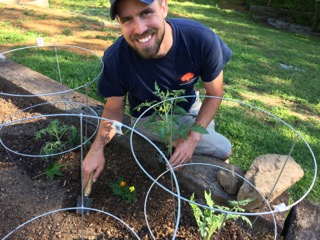 Jonathan’s current interest in sustainable agriculture and gardening grew from many of his past experiences with the United States Air Force. During his time of service, Jonathan was stationed in different countries exposing him to the widespread poverty and hunger found in regions throughout the world. He distinctly remembers seeing people without food in Haiti, and questioning how this inequity could be improved.

After leaving the Air Force, Jonathan went to Florida International University (FIU), where he ended up pursuing a degree in environmental sustainability. His involvement with a gardening club at FIU expanded his interests and made him realize the possibility to do agriculture for a living. Jonathan appreciated the value FIU placed upon local gardening, and when he came to Auburn, he expected the same values to be present. Instead of being let down in not finding the club he was looking for, Jonathan decided to start one himself.

Upon receiving positive responses when talking to peers about his ideas, Jonathan reached out to Dr. Dave Williams, head of the Horticulture Department who supported the idea, allowing it to take off. Jonathan then worked with students Ben Bramlett and Andrew Reynolds to officially start the Organic Garden Club at Auburn. The club meets twice a week and is open to anyone interested in learning more about the field through hands-on experience. Jonathan emphasizes how a diversity of backgrounds adds to the success of the group and describes it not as an agricultural or horticulture club, but as an Auburn club. He stressed that no prior experience is needed, and encourages anyone wanting to get more involved with sustainable food production to check it out.

During the first few months, the majority of the gardeners’ work included weeding and preparing the garden soil to ensure nutrient levels were adequate through soil testing. Jonathan discovered that soil is the key to everything, and stresses the importance of keeping it well maintained to ensure healthy crops. He explains that most modern farmers treat soil simply as something to grow in, neglecting to put organic material back into the system. When combined with conventional agricultural harvesting practices that further reduce organic matter levels, soils degrade quickly becoming unable to support plants. Jonathan strives to combat this by adding organic matter back to the garden through compost made from food scraps collected from Plans-2-Plate, coffee grinds from Church of the Highlands, leaves, and grass.

In early April, Jonathan and the Organic Garden Club planted the first seeds of their new garden. This included cucumbers, yellow squash, zucchini, eggplant, tomatoes, basil, and borage. These were planted in beds with intercropping, helping to control weeds and ultimately eliminating the need for chemical inputs, a main problem with large-scale agricultural production. The use of herbicides and pesticides pose a series of environmental threats, including soil degradation and detrimental health effects for both humans and animals. Often times, the added chemicals kill all microorganisms in the soil, even those that are beneficial, disrupting the balance of the ecosystem.

Another issue with large-scale agriculture is the use of genetically-modified (GM) seeds. Not only can this process be hard to control, in that it often spreads and contaminates organic farms, but GM seeds also cause economic problems in many areas.  For example, large companies often monopolize the market with GM seeds by producing new variations and requiring farmers to buy the new seeds each year, causing many farmers to go bankrupt and be hungry1. According to Jonathan, this cycle doesn’t make sense because plants, aka food, grow from seeds, but plants also produce seeds. Therefore, there shouldn’t be a problem with hunger in our society, if farming were done differently. Jonathan’s work with the Organic Garden Club proves that food production can be done in a more sustainable way on a local scale. He believes big agriculture will not be enough to feed the world, and hunger will be erased with small family farms and gardens, where people produce a portion of their own diets.

Jonathan has big plans for the future of the Organic Garden Club and will continue working hard to achieve these goals. He hopes the club will raise awareness of how easy and fulfilling it can be to grow your own food, while making education and food available to those who need it. Although at times it may have been difficult, Jonathan’s efforts with the Organic Garden Club are well worth it because he’s making a positive difference for sustainable agriculture.