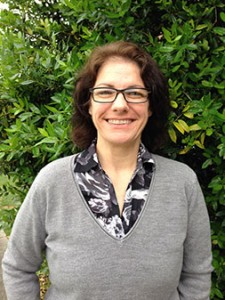 Joan Hicken works to provide the Auburn Family with recycling options while on campus.

Joan says an economic argument can be made for recycling, as well. According to a former professor of Joan’s, waste is a byproduct of inefficiency. Therefore, you’re throwing money away when you create waste.  Joan said, “I try to make both an environmental plea and an economic argument. I hope that whoever is listening to me can take that in and decide for themselves what works for them.”

Joan was led to her career in recycling and waste management through her interest and passion for nature. At an early age, her parents instilled in her a mindfulness about waste and conservation in their daily life at home. When she started her college years, Joan didn’t really know what she wanted to do, but soon discovered a recycling position in college that made her realize she had found her niche. Joan said, “I don’t even think you realize when that moment of finding your niche happens for you. What my parents had instilled in me at a young age contributed to my interest in not only recycling, but also integrated waste management.”

Joan previously served as the recycling coordinator for the city of Philadelphia before returning to a college setting at Auburn. Joan said, “I love the college setting. There’s a lot of energy and there’s an optimistic attitude that says we can accomplish anything.” At Auburn, Joan and her colleagues have been addressing infrastructure issues, such as bin placement, public space recycling, athletics recycling, and most recently educational initiatives. Currently, their office is trying to put together a more comprehensive recycling education campaign.

According to Joan, the most rewarding and promising aspect of her job at Auburn is engaging students and educating them on why waste reduction and recycling matters. Joan says it’s not as difficult to get students to realize they can make a difference during their time at Auburn if they realize their place in the community. It is through the initiatives Joan and the Waste Reduction and Recycling Department engineer that students, faculty, and staff make progress in keeping Auburn mindful of its waste impact. To learn more about becoming involved with the Waste Reduction and Recycling office visit their webpage.