Earth Day and the Overview Effect

“When we look down at the Earth from space we see this amazing, indescribably beautiful planet.  It looks like a living, breathing organism.  But it also at the same time looks extremely fragile.”  Space Shuttle and International Space Station astronaut Ron Garan, Jr. 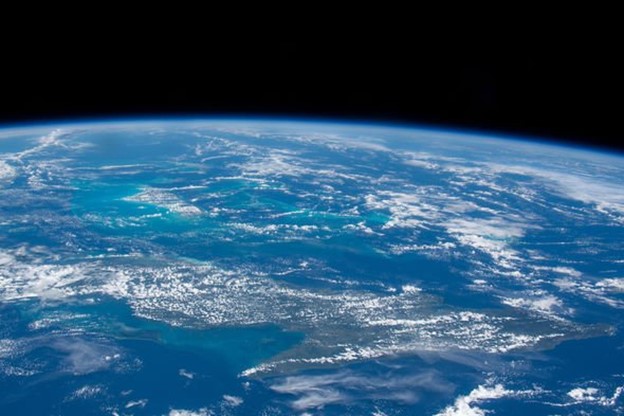 Perspective.  Our perspective determines how we see the world and operate within it.  Changing a perspective can be enlightening, revelatory even, especially when we look at things from a higher, more comprehensive point of view.

New perspectives can create paradigm shifts that change our values, our thoughts, feelings, and actions.

A more informed perspective of life on Earth and our place in the cosmos is begging for our attention.  Gaining that perspective is the whole point of Earth Day. Only by broadening the horizons of our awareness and understanding will we ever achieve the goal of Earth Day, described by Earth Day co-founder Senator Gaylord Nelson as creating “an environment of decency, quality, and mutual respect for all other human beings and all other living creatures.”

As I thought about a way to make the point about perspective, a couple of stories came immediately to mind.  And IMHO, they eloquently make the point.  The first story is from the book Moonshot by Deke Slayton and Alan Shepard.

Shepard and Slayton were two of the original Mercury 7 astronauts selected by NASA to train for the Apollo Program, which was created, according to President Kennedy’s words in 1961, “to achieving the goal, before this decade is out, of landing a man on the Moon and returning him safely to Earth.”

Shepard was the first American in space, completing a suborbital flight in 1962.  His next space venture occurred in 1971 as Commander of Apollo 14, when he became the 5th of 12 human beings to walk on the Moon.

A slightly irregular heartbeat grounded Slayton, and he became Coordinator of Astronaut Activities for NASA.  He did fly in 1975 for the Apollo-Soyuz mission, the first international docking between the US and the USSR in low Earth orbit.

Slayton and Shepard became good friends.  The following is an account told in their book of Slayton watching Shepard on the Moon and Shepard’s experience there:

Deke Slayton sat before a television monitor, leaning forward, oblivious to the passing hours, watching Alan and Ed (Mitchell, the Lunar Module Pilot and 6th person to walk on the Moon) going through their paces….  He could sense, even feel deep inside him, the sensations Alan was experiencing, the thoughts that must be in his mind….

Finally, Deke closed his eyes, listening to the voices across space.  Before the television monitor with its live scenes from Fra Mauro, he was one with Alan Shepard….

Deke opened his eyes.  Alan had stopped.  Something in the way he stood, the manner in which he had turned, told Deke that a powerful emotional strain was running through this man….

He was overwhelmed; his senses and his thoughts set afire with the miracle of what floated in ultimate darkness above him.

One-third of his planet hung magically in the void, incredibly dimensional, suspended, floating, levitated.  A third of a world, “yet it was breathtaking.  Looking up in the black sky and seeing the brilliant planet…the ice caps over the poles, the white clouds, the blue water… gorgeous!”

It was an incredible vista.  He understood now that while on Earth, it seemed almost limitless to its people….

“But from here, from the Moon,” he spoke quietly to himself, “it is, in fact, very finite, very fragile . . . so incredibly fragile.  That thin, thin atmosphere, the thinnest shell of air hugging the world—it can be blown away so easily!  A meteor, a cataclysmic volcano, man’s own uncaring outpourings of poison . . .”

Tears streaked his cheeks. He understood much of what he felt was tension draining away from the emotional travail of their flight and then the relief of a successful landing, but all of that, magnified a thousand times over, faded before that utter, fragile beauty of “our planet.”

His partner on the Moon, Ed Mitchell, is quoted in the book For All Mankind as having these reflections on the return trip to Earth:

First of all, you’re in space, in the void.  Then you see the Earth, and you see yourself approaching this planet, and we know that’s home.  The very profound shift in thinking that takes place as a result of that experience, changing from intellectually knowing that we live on a planet to the deep gut reaction of seeing that planet 240,000 miles away, is very visceral.  In my case, it made me realize that science may have had the wrong view of things. It is not just a material universe.  It has purpose and design and was created.  You started getting very global in your perspective, and that’s the perspective I’ve maintained.

Mitchell describes having emotional ups and downs during his musings:

The peaks were the cognition that it is a harmonious, purposeful, creative universe.  It was as though I could identify it, and feel it, and be it.  The valleys came in recognizing that humanity wasn’t behaving in accordance with that knowledge, that humanity was behaving…like lemmings rushing toward the sea.  The pathos, the deep sadness, came in simply contemplating the human condition – the lack of awareness of what we really are and what the universe really is.

What Shepard and Mitchell experienced has been dubbed the Overview Effect. 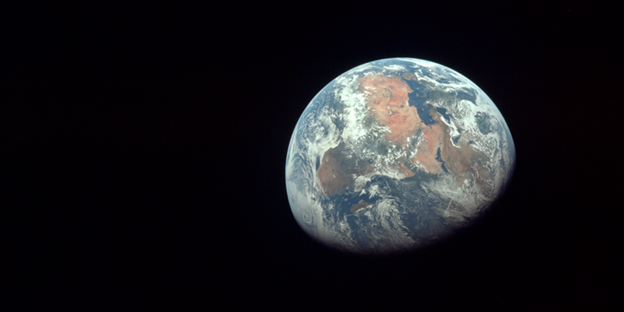 In a book by that name, author Frank White describes the Overview Effect as “a cognitive shift in awareness” that comes from seeing the Earth from above, whether from low Earth orbit or while on a lunar mission.  “It refers to the experience of seeing firsthand the reality that the Earth is in space, a tiny, fragile ball of life, ‘hanging in the void,’ shielded and nourished by a paper-thin atmosphere.  The experience often transforms astronauts’ perspective on the planet and humanity’s place in the universe.  Some common aspects of it are a feeling of awe for the planet, a profound understanding of the interconnection of all life, and a renewed sense of responsibility to take care of the environment.”

Only about 600 human beings have directly experienced the Overview Effect from space, yet surely the rest of us can feel inspired, humbled, and sobered by what they have captured in photographs and have so movingly written and spoken about. 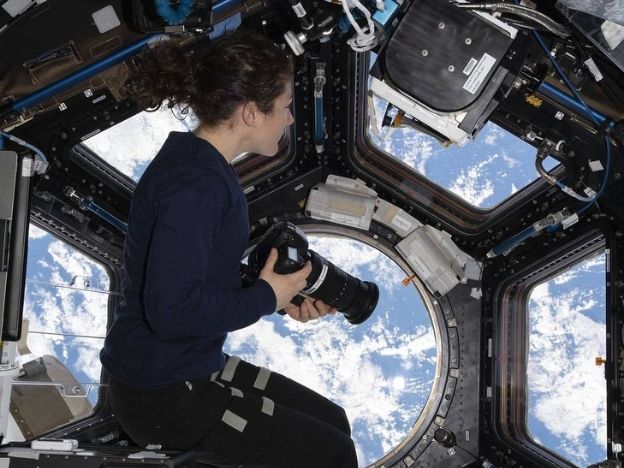 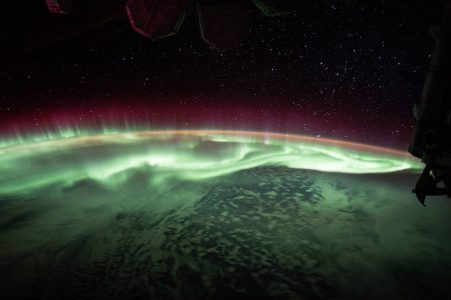 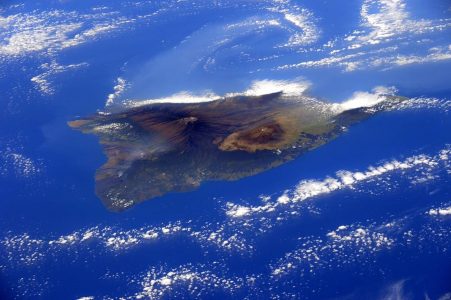 The fact is, we don’t have to leave the planet to have a similar experience.  Please read this wonderful article by author Jeffrey Kluger published in TIME in July of 2021.  The title sums it up:  “The Overview Effect Forever Changes Some Astronauts Attitudes Towards Earth—But You Don’t Need to Go to Space to Experience It.”

I think the best way we can celebrate Earth Day every day – since every day IS Earth Day – is to notice what’s around us, to intentionally open ourselves mentally, emotionally, and spiritually to experiencing the Overview Effect by witnessing the miracle and beauty of life that is everywhere.

We can feel the Overview Effect watching a sunset standing on the shore of Mobile Bay in Fairhope, Alabama 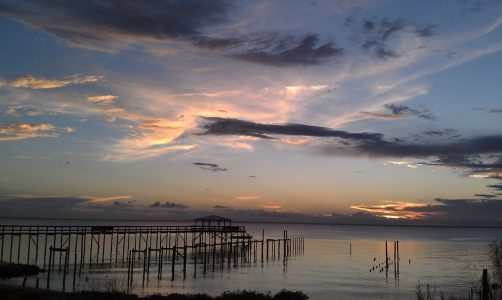 or observing a flower while on a neighborhood walk. 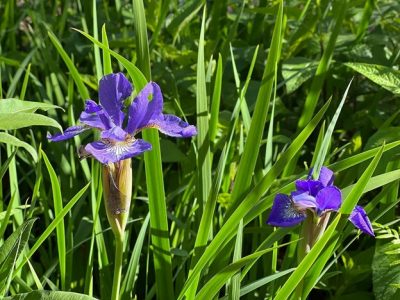 Making the “effort” to experience the Overview Effect, we honor the spirit and intention of Earth Day and contribute to achieving its goal.  We also become inspired, more peaceful, generous, and grateful, enriching our daily lives beyond measure.