Campus Changemaker: ONE Campaign at Auburn

Colleges and universities are often the breeding grounds for change. Students and faculty alike come up with innovative solutions to global issues that many individuals face. Students of institutions across the United States are presented with unique opportunities to make a difference, and Auburn University is one such institution. One of these drivers of change here is the ONE Campaign at Auburn University, led by co-presidents and student leaders Maddie Marsh and Marie Ogletree. The goals of the ONE Campaign align with Sustainable Development Goal 1: No Poverty in that it is a global movement to end extreme poverty and preventable disease. 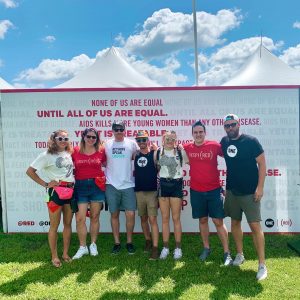 ONE Campaign’s mission statement is “ONE is a global movement campaigning to end extreme poverty and preventable disease by 2030 so that everyone, everywhere can lead a life of dignity and opportunity.” The main action of ONE is the campaigning aspect, where members target senators and representatives to support legislation aimed at global aid money and make sure that the 1% of taxpayer money allocated to foreign aid is used efficiently to end extreme poverty. The ONE Campaign’s vision is a world without extreme poverty and preventable disease where everyone can participate in life and the decisions that affect them, while enabling the “power of people to influence the people in power.” The ONE Campaign is completely non-partisan and is solely about ending extreme poverty.

The ONE Campaign started at Auburn in 2018 when the regional organizing manager, Scoggins Berg, came to speak to Maddie Marsh’s Global Studies Class. Berg explained ONE Campaign’s mission and that since Auburn did not have a chapter, anyone could start one. Maddie felt that the campaign’s mission resonated with her, so she decided to start Auburn University’s Chapter. She found students who had a similar interest to join her team, and they completed their first full campaign in the fall of 2018. Maddie has been president ever since and became co-presidents with Marie Ogletree this year. 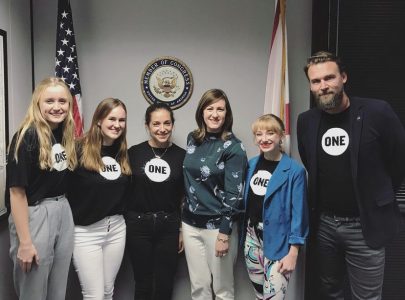 The ONE Campaign members conduct letter-writing campaigns where members collect handwritten letters to senators from constituents asking the senators to support certain legislation. During the year, ONE volunteers set up meetings at local governmental offices to share information about the campaign and to hand deliver letters. The goal is for each member to collect 10-20 letters individually. Once a year, ONE volunteers travel to Capitol Hill to lobby their lawmakers to address global health and poverty issues.  These letters address ongoing legislation, including The Global Fund, which fights to provide vaccines for AIDS, tuberculosis, malaria, other preventable diseases, specifically aimed at sub-Saharan Africa. ONE is also campaigning for replenishment of The Global Fund during the Covid-19 pandemic.ONE highlights the goals for supporting the Global Fund in its HIV/AIDS Pledge. In the past, ONE has worked on The Global Fragility Act, which establishes new strategies for the U.S. to focus on crisis prevention rather than response, helping countries prevent crises before they happen to secure a better future for people living in extreme poverty. This campaign ended when Covid-19 became widespread, and there was a big shift to vaccine equity. Vaccine equity is not a specific piece of legislation but involves supporting the Biden Administration’s agreement to share vaccines with other countries and encouraging other countries to share vaccines as well.

Auburn students can get involved with the ONE Campaign on AU Involve to be added to the email list. Once on the email list, students will receive emails when the next campaign starts with information on how to get involved. Throughout the semester, ONE Campaign holds letter-writing meetings, informational sessions, and visits different classes to attract more student involvement. As a part of increasing involvement, ONE team members find clubs and classes with similar interests to ONE Campaign. They ask teachers for permission to speak in classes and give a short presentation ending with students writing letters to representatives. If students are interested in taking on more responsibility within the chapter, they can join the ONE Campaign team. This would be more of a leadership role and involves mobilizing the students and community to take part in the campaigns. ONE at Auburn University is currently looking for team members interested in social media marketing, event management, data tracking, and public speaking. There is also an opportunity for team members to attend the Power Summit in Washington D.C., where students receive more training on the ONE Campaign and lobby specific congress members on Capitol Hill about this year’s campaign.

Interested in joining the team? Email Maddie Marsh at mam0023@auburn.edu