Fall will be here soon, alongside lower temperatures and thoughts of the outdoors. Football, camping, the changing color of leaves, and fresh produce all come to mind as essential elements of fall. Where better to get fresh produce than a farmer’s market? So grab your reusable shopping bags and get ready for the second annual Auburn Parks and Recreation Department’s Monthly Market.

The market aims to involve growers who aren’t big enough for larger markets like those in Tuscaloosa, Huntsville, and Birmingham, and to connect community members with the people growing their food. A fall starting date helps those farmers who also participate in the summer’s ‘the Market at Ag Heritage Park’ to have an income in what would normally be their “off-season.”

Last year, six farmers were represented at the market. This year, the city hopes for at least eight with the potential for new growers like the AU Medicinal Plant Garden, healthy catering options in Auburn, and a local butchery. “There’s a lot more than just produce,” Whitney Morris, the City of Auburn Aquatics and Special Events Coordinator, says. Hornsby Farms who produces jams and jellies and Pecan Point who produces oats and yogurt will both be returning to the market. 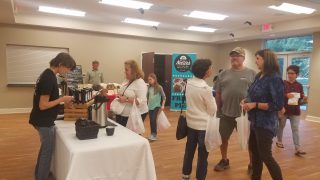 Guests and vendors at the Monthly Market. Photo contributed by Whitney Morris.

The Harris Center will become a hub for local farmers and producers to sell their goods to the Auburn community from September to April. Those interested can shop from 4:30-6:30 p.m on the fourth Tuesday of each month. According to Whitney, this time choice accommodates people who want to buy local, but don’t get off work until late in the afternoon.

The location of the market is favorable in many ways. The Harris Center is located across from the Post Office with plenty of parking. The building has an interior large enough to house six or more vendors and their produce with the option of moving outside in months with nicer weather.

Buying produce and other goods locally has many benefits for a community. Local markets create a connection between the consumer and the grower/producer. This connection makes shopping personal. Instead of picking tomatoes off a shelf, you’re handed the basket of tomatoes by someone who had a role in growing them. In addition, local markets keep the flow of money within the community. Buying local is also better for health reasons, as food decreases in nutritional value the longer it takes to get from harvest to your plate. Lastly, local markets give the Auburn community the chance to see all that agriculture in Alabama has to offer. 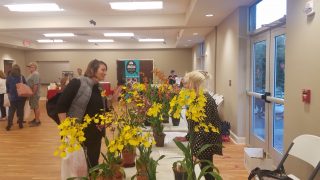 The monthly market offers both produce and other goods. Photo contributed by Whitney Morris.

The dates of the Monthly Market this fall are

For more information on the Monthly Market, contact Whitney Morris at (334) 501-2948 or wmorris@auburnalabama.org