Over The Rainbow – Sustainability in New Zealand

I love nature. I have always loved being outside and surrounding myself with the beauty and might of the outdoors. Because of this, I decided to go to Auburn to get a degree in Natural Resources Management in order to better preserve nature for future generations. The summer before my senior year, I was given the opportunity to study abroad in New Zealand. 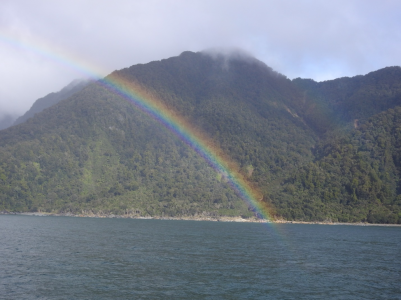 This trip was designed to show how sustainability is done in another country as well as explore the emerging field of ecotourism. Ecotourism is a form of tourism that is considered more “green” than mainstream tourism. There are four main components of ecotourism: nature based, economically viable, educational, and culturally appropriate.

Never having been to New Zealand before, I wasn’t sure what to expect. All I knew was that Lord of the Rings was filmed there. As muchas I love Tolkien, I didn’t figure it was a good indicator for the trip. The scenic beauty captured in the films was only a fraction as astounding as being able to see the country in real life.

We travelled across the South Island moving from city to city. I was surprised to learn that in each place there were some features that are simple but sustainable. The electrical outlets each have an on/off switch to cut down on wasted electricity, the hotels have eco-friendly toiletries, and the public bathrooms don’t have paper towels. As insignificant as these may seem, they really can make a difference when it is an entire country that makes the change.

The activities we did varied in degree of sustainability/ecotourism. The first tour we did was with a group that had an exclusive deal with some of the local farmers. The farmers have beach front property that is prime habitat for some of the nation’s rarest species. This company is allowed to bring tourists in to see these amazing animals, and in return they pay the farmers for the use of their land. Not only do they bring in tourists, but they also help restore the land to its natural state with native plants and invasive pest removal.

The guides on the tour were amazingly informative. They gave detailed information on each animal we encountered and answered any questions we may have had. Their passion for restoring the environment was refreshing, and their willingness to work with the farmers was awesome. It was an awesome example of ecotourism, except for the fact that they gave us an unwarrantedly large amount of bottled water. I understand that hydration is important and they may have some rules and regulations in place, but bottled water is unnecessary and plastic bottles endanger the very species they are trying to protect.

The least ecotourism-conscious place we went was Queenstown. Everyone we talked to from New Zealand mentioned how little New Zealanders (or Kiwis) actually lived there. The town was a mecca for adrenaline junkies. There were so many extreme activities to participate in such as bungee jumping, canyon swinging, and sky diving. While we were there we rode the gondola. It was an amazingly beautiful ride, but the track that the gondola went along was not very well kept up and there were places where you could see the beginnings of gulley erosion This type of erosion usually occurs on inclines where water is not allowed to drain properly and can lead to deep ruts.

The entire time in New Zealand we had been hearing about the Maori people, the ones who originally settled the land. They had been decimated by the Europeans when they settled. It was nice to hear from each tour how important the Maori were then and are now, but hearing about a group and hearing from a group are two very different things. Cultural sustainability is one of the key components of ecotourism which is why we attended a traditional Maori dinner the last night in New Zealand. We were able to meet a group of Maori people and learn about the culture.

Before coming to New Zealand, I had believed that it was some paradise that existed over the rainbow. A place that was lightyears ahead in sustainability and ecotourism. Having been there, I can say that in some ways this is true. I saw more recycling bins on sidewalks than I ever had before. Sure there are some places that are less ecofriendly, but the country on the whole is trying to be more sustainable. It may take some time, but I believe that more changes can be made even in places like Queenstown. But I can also say that it’s not perfect. Then again nowhere is.