On Beekeeping, Queens, and Her Royal Court

Home » Blog » On Beekeeping, Queens, and Her Royal Court

In the north-eastern province of Fiji’s largest island, Vanua Levu, lies the agricultural town of Labasa. Known primarily for its sugar cane production, Labasa houses the only sugar mill on the island as well as the countless farmers who plant and harvest the fields. Twenty-four years ago, the town gained two farmers who brought a fresh way of farming to Labasa.

In 1992, Chuck and Sue McCay moved from Australia to Labasa as teachers, but they soon relocated to the surrounding mountains and began their journey as sustainable farmers. In June, I, along with twelve other Auburn students, had the privilege of staying at the farm with Chuck, Sue, and their two incredible children, Tia and Mitchy. The aptly named Cegu (meaning rest in Fijian) Valley Farms was once a rolling sugar cane field, but Chuck and Sue had a different vision for the land; they wanted to create a training center for sustainable farming in developing nations. From the ground up, they built the cozy home that is now encircled by sheep pastures, lemon trees, free-range chickens and ducks, pineapples, bee boxes, and a greenhouse abounding with life. 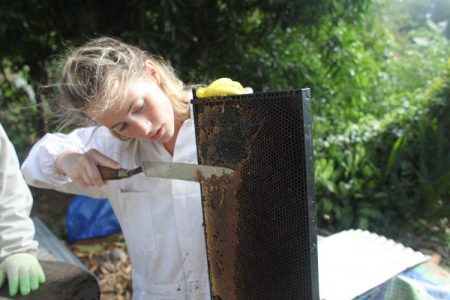 On the second day of our stay, Chuck needed help harvesting honey, and I was thrilled. I zipped on my bee suit, felt a little like Daft Punk, and started sweating. From a friend, I knew a little about beekeeping, but I had never opened a bee box or scraped honey from a tray. The bees entranced me, and I was mesmerized watching honey ooze from the comb.

Struck with curiosity, I wanted to know more. The next morning, Chuck sat down with a few of us and walked us through the beekeeping process. The hive dynamic intrigued me most. Typically, noncommercial beekeepers start with two hives in case one hive swarms away (which happens often) or dies. In this case, the beekeeper will split the remaining hive between the two boxes, which is a difficult process. A beekeeper does not choose the bees to split at random; he or she divides everything (broods, honey, etc.) strategically. Because only one Queen lives in a hive, the nursing bees in the new hive feed the brood royal jelly to grow a new queen. The nursing bees feed the potential queens—can we call these princesses? —until the first one hatches and claims her title as Queen.

Though we didn’t locate a queen during my visit, I learned a lot about them. As most know, the queen is the mother of every bee in her hive. She mates with about 100 drones (male bees), who, in turn, mate only once and die. When the queen mates, she flies into the sky, and, sensing her pheromones, drones from all hives fly to her to mate. The queen is not choosy when vetting for mates. She mates with as many drones as she can, whose sperm she stores in her body for two to three years. On average, a queen lays around 3,000 eggs a day—and we think octuplets are hard work!

While the hive would not persist without the queen, the drones and worker bees (females) also play vital roles. Worker bees have five different jobs, progressing from cleaners to nursing bees to fanners, then guards, with the premier job being a forager. To me, the fanners and guards are the most impressive.  Fanners control the temperature of the hive, keeping it at a steady 38 degrees Celsius. After drinking water, the fanners stand in rows and beat their wings to provide air conditioning. The guards, who earn their title once their stingers develop, regulate who enters and exits the hive. If bees drink too much honey, they get drunk and when a drunk bee tries to enter the hive, the guards keep them at bay until they are sober. Worker bees live about one month, but new broods are born each day, giving the colony no time to grieve.

When asked how beekeeping in Fiji compared to beekeeping in the United States, Chuck said it looks vastly different. In North America, varroa, a deadly bee mite, is decimating the bee population. This mite hasn’t reached the South Pacific, so the hives in Fiji are healthier with higher chances of survival and growth. However, wax moths do pose a problem for bee hives in Fiji. The bees can defend themselves against these moths most of the time, but they still pose a threat. Another disease, the American Fowl Brood, is uncommon but serious as it kills the entire brood. The first instance of American Fowl Brood in Vanua Levu occurred in 2015, and the Fijian minister of agriculture insisted that the farmers burn the hives and quarantine the spot for years. Though colonies are in danger of disease, Chuck says hive growth in Fiji isn’t hard as long as the farmer keeps an eye on them every week or two.

Besides my fascination with bees themselves, I was interested in beekeeping because of how important the bee population is to the general food supply. In America, with the decrease in the bee population, demand for bee products is rising, but the products are becoming less and less available. Bees do more than make honey and beeswax, they are crucial to our food supply because they pollinate plants all around us. If we lose bees, we may lose our fruits, vegetables, and flowers. Though beekeeping can be difficult in the United States, it’s imperative for our ecosystem that efforts are made to understand bees and raise healthy hives.