By adminSeptember 5, 2018No Comments

I woke up early, around 6 in the morning. My host brother, Jona, was already awake and waiting for me. This was the first time that I saw him in daylight. The night before, he had gone to the mainland to pick up his brother from work for the weekend and had gotten back late. But still, he was up with the sunrise, and ready to get to work. We grabbed our machetes and headed out behind the house. We were walking towards Jona’s cassava patches on the edge of the village of Vesi. Jona has a whole plantation behind his house, full of cassava plants, banana trees, coconuts, and more. We were headed out to pull some Cassava for breakfast. 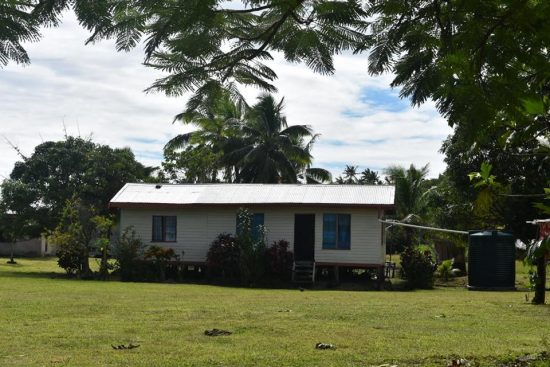 As we walked on a dirt path through the trees, I noticed that Jona had a limp, and a pretty bad one. His knee was all twisted, and he moved in jerky, irregular motions. He pointed to a ripe papaya above his head and told me to grab it. I plucked it off the tree and we kept going. A few minutes later, we reached Jona’s cassava patches, and quickly pulled three of the large plants out of the ground. After planting a few more cassava plants to replace the ones we took, Jona and I sat on the ground and cut into our papaya.

While we were sat there eating, we got to talking. We exchanged stories about our families and talked briefly about my trip to Fiji so far. Jona then told me that he used to be a fisherman, going diving for a living. One day, while he was out spearfishing, he lost track of time and ran out of oxygen at 60 meters below the surface. He had just enough left in his tank to make an emergency ascent to the surface, but in doing so he got decompression sickness, and was paralyzed from the neck down for a year. Years later, he still struggles to walk, and his fine motor skills in his hands have not completely recovered yet.

Even with these injuries, Jona continues to go fishing regularly, although he rarely sells his catch anymore. The fish, combined with what he grows on his plantation is enough for him. If he needs anything else, he can trade with other people in the village. On the occasion that he does really need to buy something, he will catch some fish, pull cassava, and head into the town of Labasa to sell them. Other than that, Jona said that he doesn’t need any money in Vesi, and he likes it that way. His friends in the village will always be there for him and will help him out if he is in need. That is the way life works in the village. Everyone is family, and they all help each other. After we finished our papaya, we grabbed our machetes and fresh cassava, and walked back to the village to have breakfast.

I learned a lot from Jona that day. He taught me about a whole different way of life. He taught me to look at money differently, and to not get so caught up in trying to become rich. I learned about community, and the importance of family- even if they are not related by blood. He made me think about my life, and where I am headed. Will I ever be as happy as the man that I met in Vesi? Will I be able to live my life as sustainably as him? Hopefully, one day, I will have it all figured out, just like my brother Jona.