By Mike KenslerOctober 6, 2020No Comments

“The human heart is the first home of democracy.  It is where we embrace our questions.  Can we be equitable? Can we be generous?  Can we listen with our whole beings, not just our minds, and offer our attention rather than our opinions?  And do we have enough resolve in our hearts to act courageously, relentlessly, without giving up – ever – trusting our fellow citizens to join with us in our determined pursuit of a living democracy?” – Terry Tempest Williams

In 2015 the nations of the world committed to achieving 17 Sustainable Development Goals at every scale of society, from local communities to international agreements and cooperation.  Goal 16 is Peace, Justice, and Strong Institutions.

As I think of the current status of peace, justice, and strong institutions around the world and here in the United States, I find them worse in 2020 than they were in 2015, and they were not great then.

Climate change, political instability, racial and economic injustice, and the COVID-19 pandemic are some of the factors creating significant upheaval in society.

Democracy around the world and here at home is in need of our tender, careful attention.  The title of this column is the title of Parker Palmer’s 2011 book, Healing the Heart of Democracy, and this is what his book is about. Here’s a PBS video broadcast of Palmer from 2015, giving an address on the ideas in the book.

Like Terry Tempest Williams, Palmer emphasizes the human heart as the “first home of democracy.”  He defines the heart as “…intellect, intuition, feeling, imagination, will – which taken together, constitute the core of self-hood called the human heart.”

Palmer writes that the human heart is capable of great cruelty, but it is also capable of generosity, kindness, compassion, and humanity, each case determined by which one of two ways our hearts have been broken.

One way to suffer heartbreak in times of loss, betrayal, injustice, and other painful experiences is for the heart to break apart and shatter.  It becomes cold, hard, brittle. Resentment breeds, horizons shrink, experiences narrow, and the other becomes an enemy.

Another way for a heart to break, according to Palmer, is to break open, to become more “grateful, alive, and loving” for what it has suffered.  The heart expands in service to others. He describes this heart as “an alchemical retort that can transform dross into gold.”

Palmer writes that when hearts break apart, “…fearmongers whip up what Henry Giroux has called a ‘culture of cruelty,’ working nonstop ‘to undo democratic values, compassion and any viable notion of justice and its accompanying social relations.’”  Ignited this way, these hearts lose the capacity to embrace the mind- and heart-set, which nurtures the skills of citizenship, the capacity to listen and speak with openness and respect across differences to achieve a shared outcome, a common future.

Palmer calls conflict over ideas, “an engine of a better social order.” He explains that this kind of conflict is designed into our democratic system, and the unwillingness or inability to embrace conflict over ideas is extremely dangerous to the American experiment in democracy.

But that is not the kind of conflict we are experiencing in the United States today.  American journalist and commentator Bill Moyers assessed our circumstances this way: “We have fallen under the spell of money, faction, and fear, and the great American experience in creating a different future together has been subjugated to individual cunning in the pursuit of wealth and power….”

The frustrations many Americans feel toward government is understandable.  For most Americans, government no longer works for them, and research bears this out. This article in Journalist’s Resource at the Harvard Kennedy School’s Shorenstein Center on Media, Politics and Public Policy provides a link to a 2014 study published in Perspective on Politics by researchers Marin Gilens of Princeton and Benjamin Page of Northwestern.  The authors conclude their study this way: “The central point that emerges from our research is that economic elites and organized groups representing business interests have substantial independent impacts on U.S. government policy, while mass-based interest groups and average citizens have little or no independent influence (emphasis added).”

As a result, many Americans have given up on government and disengaged from civic life.

This saddens and angers me, especially when I think about our power and potential as citizens to turn things around once we realize our agency and cultivate the skills of citizenship to deploy it.  Disengagement is exactly the wrong thing to do! Only by exercising our rights of citizenship will we grow into the capacity to regain our democracy for ourselves as one people.

orm of government was what this nation’s founders spent all their time doing.  Yes, what they created was, in practice, exclusionary and discriminatory, but the institutions and systems they created maintain their capacity and promise for “government of the people, by the people, and for the people,” as Abraham Lincoln described it.

Another danger to our democracy is the incessant elevation of individual freedom as the be-all and end-all of what it means to be an American.  In a democracy, individual freedoms dwell within our shared commitment to the common good.  Our responsibilities and obligations to each other, the world around us, and future generations are the context within which individual freedoms can thrive; anything less results in the oppression of the many. 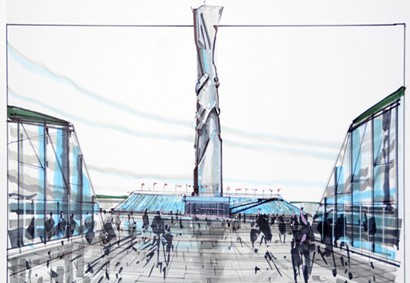 In his classic work Man’s Search for Meaning, Viktor Frankl wrote, “Freedom is only part of the story and half the truth…. That is why I recommend that the Statue of Liberty on the East Coast be supplanted by a Statue of Responsibility on the West Coast.”  A group of citizens has acted on Frankl’s vision. That statue has been designed and is expected to open to the public on the West Coast in 2023.

Palmer explains why some hearts break open to become supple and strong to embrace individual responsibility for our shared wellbeing.  For some, this outcome is the result of a spiritual practice. For others, “it is because life takes them to places where it is either ‘do or die.’”

Parker goes on to say: “We are now at such a place as a nation: we must restore the wholeness of our civic community or watch democracy wither…. If we cannot or will not open our hearts to each other, powers that diminish democracy will rush into the void created by the collapse of ‘We the People.’ But in the heart’s alchemy that community can be restored.”

That was certainly the choice for Viktor Frankl, who, while suffering the unimaginable horrors of the Holocaust in concentration camps, opened his heart to others by comforting and reassuring them despite his own deprivations and suffering.  He spent the rest of his life helping others develop meaningful lives, showing how “the heart’s alchemy” restores individuals and communities.

As always, the future is up to us.  Frankel’s choice, Palmer’s choice, is ours: hearts broken apart, or hearts broken open?  Are we being manipulated by those Palmer calls “the hucksters of hate,” or led by “the better angels of our nature?”

As far as I am concerned, Palmer makes it clear:  we only have one choice. “Restore the heart to its rightful role as the integral core of our human capacities, and it gives us a place of power in which to stand, along with the kind of knowledge we need to rebuild democracy’s infrastructure from the inside out.”