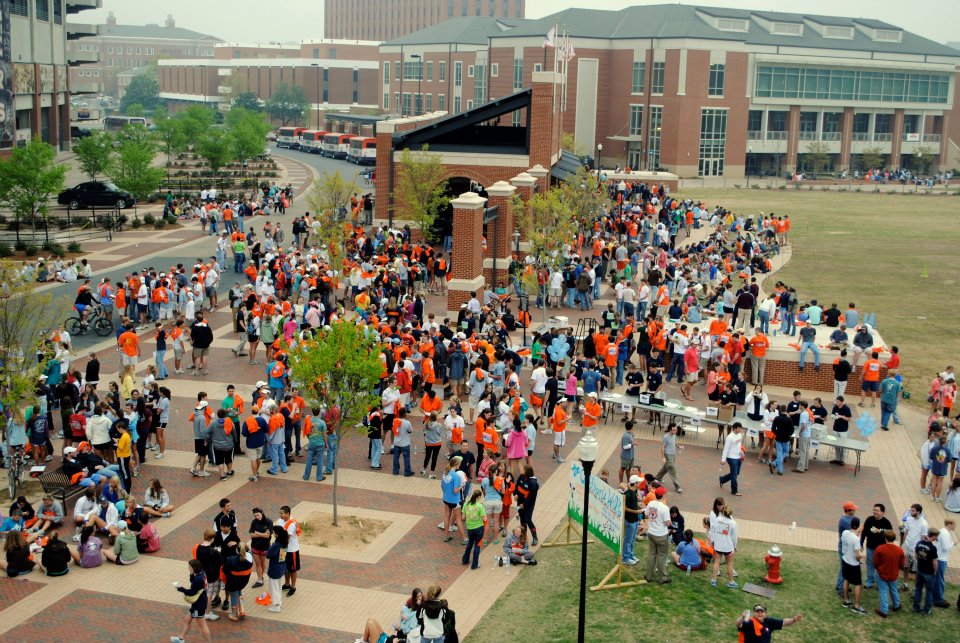 “A determined effort by colleges and universities to promote civic and social responsibility among their students could do much to improve the quality of civic life in America.” Michael McPherson

“We stand at the beginning of a world in which free citizens, across boundaries and borders, learn to act together in consciously political ways to create the future.” Harry Boyte

“A strong community helps people develop a sense of true self, for only in community can the self exercise and fulfill its nature: giving and taking, listening and speaking, being and doing.” Parker Palmer

I think it is safe to say that everyone wants to live a life of meaning, to contribute to something larger than themselves, to engage their talents and abilities in partnership with others to make a positive difference in the world. There is plenty of evidence that Auburn University students feel this way, as every year a large majority of students participate in one or more community service activities.

And that is a good thing because the need for our talents, abilities, and skills is growing in communities everywhere. Here we are in the fall of 2014, and whether we look at our local Auburn-Opelika community, around the state of Alabama, across the United States, or globally, lots of people are struggling.

One of the indicators of a healthy community is the vitality of its public life, the degree to which citizens are actively engaged together across social, economic, and political boundaries to negotiate and collaborate on behalf of the public good and the community itself. Yet many low income and other marginalized people feel powerless and voiceless. Often lacking education and even basic resources, they are relegated to receiving admittedly needed services, and come to see themselves as having no role or opportunity to participate, and, like a lot of people in society, doubting that they have anything worthwhile to contribute.

Community service offers an excellent opportunity to change this dynamic for the better, depending on how we see and engage with those in need. When it comes to helping others I think we can learn a lot from President Franklin Roosevelt and his efforts on behalf of the American people in response to the Great Depression.

The Great Depression of the 1930’s threw millions of Americans into terrible, bleak poverty. In his second inaugural address in 1937 President Roosevelt acknowledged ‘‘millions of families trying to live on incomes so meager that the pall of family disaster hangs over them day by day…. I see one-third of a nation ill-housed, ill-clad, ill-nourished.’’

In response, President Roosevelt created a series of domestic programs including the Civilian Conservation Corps and the Works Progress Administration that between them employed more than ten million people during their existence.

Those suffering through the Great Depression have commonly been depicted as helpless, downtrodden, with nothing to offer, in need of rescue through government largesse. And as the Depression dragged on more than a few down and out Americans very likely came to see themselves as failures. A common perception is that Roosevelt looked across America at these helpless souls and created programs to save them.

According to my friend and mentor Harry Boyte, co-director of the Center for Democracy and Citizenship at Augsburg College in Minneapolis, that’s not at all how Roosevelt saw struggling Americans. He saw them as fully capable people brimming with talents, abilities and skills who simply lacked opportunities to apply them. Their circumstances were no reflection on them or what they were capable of. Roosevelt believed in and respected everyday citizens and created opportunities for people to put their talents and skills to use. His efforts improved the nation and changed countless lives for the better.

This difference in perspective, having faith in people and seeing others – regardless of their circumstances – as capable and talented instead of in need of rescue, can make a big difference in how we interact with people, and influences how they see themselves. Our approach can nurture in others a realization of their own agency, their own ability and power to act in their own behalf, and on behalf of their communities, to make things better.

And by the way, let me interject here that my comments should not be misconstrued as an argument that programs such as Head Start and the Supplemental Nutrition Assistance Program should be scrapped. The point I am raising for consideration is about how we view and engage with those in need, and how we can improve individual lives and civil society by creating processes that bring people together and tap individual and collective wisdom to co-create the communities we want.

If sustainability is in part about seeing the world through a different, revealing, and empowering lens – and it is – then the lens of “public work” enables us to engage with others in more meaningful and impactful ways that empower individuals and communities to be the architects of their own future.

In Harry’s words, the lens of public work enables us to “re-imagine professionals as part of the political and civic mix, not as outsider fixers, and a way to highlight the civic contributions of groups, from minority and low income communities to new immigrants and young people, often seen in terms of their needs or deficiencies not their talents and intelligence.”

The Economic and Community Development Institute (ECDI), supported by Alabama Cooperative Extension System and Auburn University, works with communities around the state to improve the lives of their citizens. Led by Dr. Joe Sumners, ECDI takes a “public work” approach when it comes to civic engagement: “Our goal at ECDI is to help strengthen the capacity of communities to solve their own problems. We see our role as ‘listener, connector and catalyst’ much more than ‘expert’.” And it is one reason why EDCI’s services are in high demand around the state.

Dr. Mark Wilson directs the College of Liberal Arts Civic Learning Initiatives program, and oversees it’s minor in Civic and Community Engagement (CCE). Dr. Wilson and his students work with a variety of communities, from Lee County to Appalachia. Mark told me about a project his students have designed that illustrates the difference between volunteering to help others in need and partnering with them, thereby acknowledging and tapping their talent and worth, to create something of value for the community.

Students in the minor’s introductory course work with children in the Lee County Youth Development Center (LCYDC). These children are typically poor and many live with very difficult family situations. Auburn students help children at the center with homework, talk about life as a college student, and look for ways to make life a little easier.

A former CCE student is now working for a corporation and reached out recently to see if a current CCE project could benefit from a small grant. Since AU students perform service-learning at the Youth Development Center, that seems like a good place to spend some extra funds. But rather than see youth at the Center as recipients of charity, the AU students will collaborate with Center youth to create gift bags for tweens and teens who are hospitalized at East Alabama Medical Center.

It is amazing what a difference this shift in perception and approach makes. Perhaps as much as anything we could do, respecting others and joining with them in common purpose on behalf of the common good serves to empower individuals and communities and regenerate the fabric of citizen engagement that is so necessary if we are to create a sustainable society.