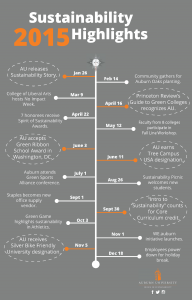 “It was the best of times, it was the worst of times…”
~Charles Dickens, A Tale of Two Cities

These opening words from A Tale of Two Cities were first published in 1859. Looking back at the year 2015, they could have been written yesterday.

Any attempt to create a comprehensive list of all the good, the bad, and the opportunities at this moment in December, 2015, would be impossible and exhausting, and would send any readers who happen to wander onto this blogpost scurrying for something else to do.

First, a few Auburn University-focused Good things that happened in 2015:

• Auburn was once again included in the Princeton Review’s Guide to Green Schools.

• The Auburn Oaks were planted anew.

• There is a growing appreciation of the importance of trees on our campus and Auburn hired our first university arborist.

• Auburn became the first, and so far only, college or university in the state to receive a Bicycle Friendly University designation by the League of American Bicyclists. We earned a Silver rating.

• Another first: recognition by the U.S. Department of Education as Alabama’s first and only Green Ribbon University for our sustainability efforts.

• With the leadership of Auburn Athletics, Auburn became our state’s first member of the Green Sports Alliance, a rapidly growing international organization of college and professional sports teams, leagues, and venues with a mission to “promote healthy, sustainable communities where we live and play.”

• A new Strategic Faculty Cluster will hire faculty to focus on Climate, Human and Earth Systems Sciences to tackle challenges to global sustainability.

• We.Auburn was established as part of the national Green Dot Bystander Intervention Program to stop sexual violence. “Be the dot. Be the difference.”

• Tree-free office paper: Thanks to our new contract with Staples, we now have easy access to Tree Zero Paper. You can purchase responsibly-made, tree-free paper at a competitive price. It’s what the Sustainability Office now uses.

Now for some Bad stuff, plenty of which is happening at the state, national, and global scales.

• According to the Alabama Department of Archives and History, our state is known as an environmental “sacrifice zone” because of historically lax rules and enforcement when it comes to environmental protection and protecting the public from air, water, and other forms of pollution. Since 2008 Alabama has ranked no better than 49th of the 50 states in funding for environmental protection. In 2008 the Alabama Department of Environmental Management (ADEM) received a relatively low $6 million from the general fund. This year the legislature failed to provide sufficient funding for many essential state services. ADEM’s budget allocation from the general fund this fiscal year is $280,000.

• The U.S. Justice Department recently notified Alabama’s Attorney General that the state has failed to comply with the 1993 National Voter Registration Act, enacted to make voter registration easier. A lawsuit is imminent unless the state complies.

• According to NASA and NOAA, 2015 is on pace to be the warmest year on record, replacing previous record year 2014 as global climate change continues unabated.

• We learned this year that in the 1970s and ’80s oil industry giant Exxon’s own research confirmed fossil fuels’ role in causing global warming. Its models from that time are quite accurate in predicting what has happened since. Yet ExxonMobil has aggressively funded efforts to obfuscate and deny the science of climate change.

• There are more than 80,000 chemicals on the market in the U.S. and less than 1% (about 200 actually) have been adequately tested for impacts on human health. Current efforts to update and improve safety standards have little support in Congress.

• The vast gap between the rich and everyone else persists. In the U.S. the richest 1% own 40% of the nation’s wealth while the bottom 40% of Americans own a mere 0.3%. This makes the U.S. the most economically unequal of Western nations.

OK, enough of that.

What about some Opportunities for 2016?

• Here on campus there are some easy things anyone can do. We can organize workspaces to incorporate more sustainable practices:

Start using Tree Zero paper! Trees do much more good growing in place, providing habitat and shade, preventing erosion, and capturing carbon while emitting oxygen than as paper on desks and in files. (Staples SKU 697216)

‘Print’ to an electronic file when possible and print on both sides of the paper when it isn’t.

Shut down when not in use: lights, computers and peripherals… anything that uses electricity. Campuses that undertake comprehensive efforts can save significant amounts of energy, money, and prevent carbon pollution in the atmosphere. One easy step is to obtain a “smart” power strip that shuts down peripherals when a computer is turned off.

Be conservative with our resources: Eliminate waste; reuse what we have; turn waste streams into resource streams by recycling. Speaking of recycling, Auburn currently recycles a mediocre 13% of what otherwise becomes solid waste.  That is well below many of our peer institutions. We can do much better.

• Citizen activism: With the 2016 election cycle, we can do our best to elect and advise responsible leaders who will tackle the great sustainability challenges we face that threaten national and global security and societal wellbeing. On January 27 Conservation Alabama will be on campus giving a workshop on becoming an effective citizen advocate.

• Taking care of each other: Thanks to the leadership of SGA and other student organizations, the initiation of the Green Dot program, efforts by units around campus, and recent comments by President Gogue, there is heightened awareness of the need for humanity, generosity of spirit, acceptance, kindness, appreciation of diversity, and open-mindedness in our interactions with each other. We can all make a difference in cultivating a safe, welcoming, and inclusive campus community.

• Taking care of ourselves: I write about this a lot because it is probably the single most important thing we can do. If we nurture ourselves, it gives us the capacity and desire to nurture others and the world around us. We can: Eat well. Exercise. Get enough sleep. Make time and space for stillness, quiet, non-doing, spirituality. Stay connected or reconnect with the natural world. Make new friends. Spend time with those closest to us and hang out with those who bring out the best in us. Stretch ourselves. Learn a bunch of new things. Do nice things for others. Take good care of the loveliest village on the plains. Have fun.

Our individual and collective actions accumulate day by day and determine what the future will look like. By being intentional and attentive, we can create the future we want. Make no mistake, what each of us does matters. As Jane Goodall puts it:

“What you do makes a difference, and you have to decide what kind of a difference you want to make.”