Director’s Corner: Waste: An Idea Whose Time Has Gone

“There is no such thing as ‘away’. When we throw anything away it must go somewhere.”

– Annie Leonard, The Story of Stuff

Envision a world where human civilization, including everything we build and use, has a regenerative and restorative impact on the planet, where what we make and how we use things creates abundance and health for all life on Earth. It’s possible, but first we have to get rid of the idea of waste.

A lot can be said about the design and manufacture of material goods and our way of life that generates so much waste, and the innumerable negative consequences of that waste. Contributing to global warming and climate change is just one of those impacts.

That’s just the emissions reported from waste management facilities. It does not include fossil fuel burning at those facilities, or other emissions-related waste of the products we use. EPA reports that “Every stage of a product’s life cycle—extraction, manufacturing, distribution, use, and disposal—indirectly or directly contributes to the concentration of GHGs in the atmosphere and affects the global climate.”

Plastic is getting a lot of attention these days for its ubiquity and impact. The more we look the more we see and the more frightening it is. For a comprehensive explanation of plastics and climate change, check out this just-published post from Yale Climate Connections, How plastics contribute to climate change: They generate heat-trapping gases every stage of their life cycle.

To really tackle the problem of waste we need to think much bigger and much differently. We need to redesign the way we make things, and we have to reconsider the concept of waste. Think about it. Waste is, well, a waste. It’s a market failure. Waste is the result of fundamentally flawed thinking that there is an “away” somewhere, and that there is space somewhere in the air, water, or land to receive what we throw “away,” without negative consequences. 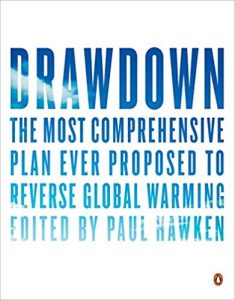 Consider food waste. Globally, one third of the food we grow is wasted. In the U.S. it’s 40%. According to Project Drawdown, wasted food generates about 8% of global GHG emissions, and eliminating food waste is ranked as the #3 most potent solution for reversing global warming.

In landfills, rotting food and other organic materials like paper, cardboard, and yard waste, generate methane, a greenhouse gas that is 85 times more damaging to the atmosphere than carbon dioxide over a 20 year period. A white paper by the International Solid Waste Association (ISWA) titled “Waste and Climate Change” reports that “Landfill methane emissions are the largest source of global GHG emissions from waste sector activities.”

For a while, the concept of “away” worked, when the Earth was “empty,” as economist Herman Daly likes to describe it. When there were few people and the waste they generated was organic and could be absorbed by the planet, there was no noticeable global problem. But now, the Earth is full. We are rapidly approaching a global human population of 8 billion. In 1950, population was 2.5 billion. Plus, we are generating so much more waste, and so much more dangerous waste. Away, which never really existed at all, has demonstrably gone away.

Then there’s the fact that waste is a human invention. It is the result of the way we design and make things. Waste does not exist in nature. In their paradigm-shifting book Cradle to Cradle, Bill McDonough and Michael Braungart write, “Nature operates according to a system of nutrients and metabolisms in which there is no such thing as waste.”

If the first rule of sustainability is to live in accord with the laws of nature, then to live sustainably the concept of waste needs to go away.

At least as early as 1992, McDonough and his colleagues declared as much. They wrote The Hannover Principles: Design for Sustainability, prepared for EXPO 2000, The World’s Fair in Hannover, Germany. Hannover Principle 6 (of 9): “Eliminate the concept of waste. Evaluate and optimize the full life-cycle of products and processes, to approach the state of natural systems, in which there is no waste.”

ISWA agrees. The ISWA white paper concludes that “Potential savings from eliminating waste and minimizing waste is far greater than managing waste after it has been created.” The first sentence of the organization’s vision statement is “ISWA’s vision is an Earth where no waste exists.”

Is it really possible to achieve this, to be industrious and productive and prosperous without generating waste and doing so much other damage to the Earth? It’s a heavy cultural and political lift and we won’t get there overnight. But we can do it, and ultimately we have no choice.

McDonough and Braungart are confident it’s possible, and are proving it. In 2005, their company, MBDC, created The Cradle to Cradle Design Framework, “a design framework inspired by nature, in which products are created according to the principles of an ideal circular economy.” Companies began using this framework to design and manufacture products according to nature’s principles. 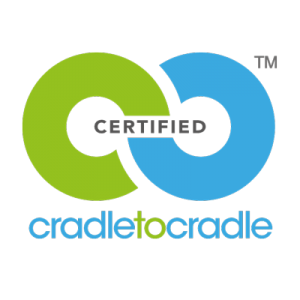 The Introduction in Cradle to Cradle concludes with a vision of what the world can look like when we use nature-based design principles to create things, and contrasts the impact of one industrious species that operates according to nature’s design principles with human industriousness as practiced so far:

We see a world of abundance, not limits. In the midst of a great deal of talk about reducing the human ecological footprint, we offer a different vision. What if humans designed products and systems that celebrate an abundance of human creativity, culture, and productivity? That are so intelligent and safe, our species leaves an ecological footprint to delight in, not lament?
Consider this: all the ants on the planet, taken together, have a biomass greater than that of humans. Ants have been incredibly industrious for millions of years. Yet their productiveness nourishes plants, animals, and soil. Human industry has been in full swing for little over a century, yet it has brought about a decline in almost every ecosystem on the planet. Nature doesn’t have a design problem. People do.

Here is one small example of what a change in design thinking could accomplish. What if we took to scale something that has been practiced for generations? Composting.

What if we managed organic materials as an invaluable nutrient source as nature does and stopped sending food, paper, cardboard, tree and yard waste to landfills? What if, to start, at home we each keep paper and cardboard out of landfills by recycling, minimize food and yard waste and find ways to compost what remains, and then join together to demand that policymakers take this practice to scale in our communities?

Albert Einstein observed that “A clever man solves a problem, a wise man avoids it.” Surely humans are wise enough to make the concept of waste go away and avoid its problems altogether.