“When I see an adult on a bicycle, I do not despair for the future of the human race.” ~H.G. Wells 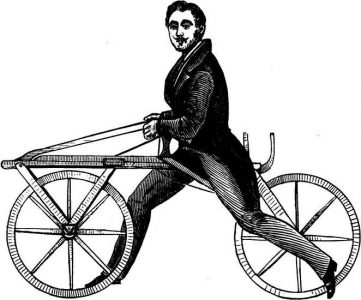 A depiction of the Luafmaschine.

A 200th anniversary slid by this summer without much notice for the invention of a taken-for-granted transportation device that changed the world, and today holds world-changing potential for sustainable transportation.

Two hundred years ago, on June 12, 1817, in Mannheim, Germany, Baron Karl von Drais introduced the world’s first bicycle.  It was made of wood and had no pedals, gears, or chains.  He pushed himself along first by one foot and then the other.  He called it a Laufmaschine (running machine in German).

Thanks to rough roads and wooden wheels it was a jarring ride, but a lot faster than walking.  In fact, his first (10-mile) ride took less than an hour and was faster than a local horse-drawn coach.  The press dubbed his invention a “Draisine” after its inventor, and while it was never profitable, the device attracted inventors around the world who tinkered with his ideas.

In the 1860s a big innovation happened that ensured the bicycle would have a successful future: pedals!  Frenchmen Pierre and Ernest Michaux had the bright idea to add pedals to the front wheel.  Ever wonder why early bikes had that funny looking huge-front-wheel-tiny-back-wheel design?  It was because the pedals were attached to the front wheel. 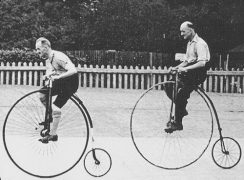 Riders a top of the next iteration of the bicycle, a penny-farthing. (Photo credit: Flikr)

A large front wheel meant that a person could travel farther with one rotation of the pedals.  The bad news was these “penny-farthing” bicycles – the first to be called “bicycles” – were hard to mount and were really bad news for riders when they crashed.

It was barely ten years later when Hans Renold created the roller chain, which is used to this day to transfer power on mechanical devices of all kinds.  The roller chain meant bicycle pedals could be moved from the front wheel, placed directly below a rider sitting between the wheels on equally-sized tires, and whose feet were within reach of the ground.  The bicycle began to look much like one we would ride today.

The bicycle’s contributions to society are varied, plentiful, and well-documented. There is an abundance of scholarly articles about the sustainability of bicycles and cycling.

Cycling is good for human health and wellbeing. Commuting, cruising the roads, or exploring the great outdoors does wonders for physical health and fitness and can be a magic elixir for mental and emotional wellbeing, too.

Bicycles have also changed society in dramatic ways.  For example, it is not well known that bicycles had a revolutionary impact on the liberation of women.  When the modern bicycle was developed in the late 1800s women were living constrained lives, tied to domestic duties and strictly limited in mobility.  Of the bicycle, activist Susan B. Anthony said, “Let me tell you what I think of bicycling. It has done more to emancipate women than anything else in the world. It gives a woman a feeling of freedom and self-reliance. The moment she takes her seat, she knows she can’t get into harm unless she gets off her bicycle, and away she goes, the picture of free, untrammeled womanhood.” Awesome! 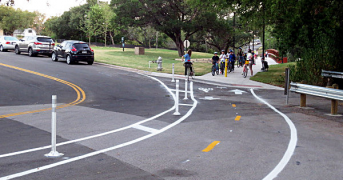 Today, cycling can make a significant contribution to resolving congestion and pollution problems in cities.  A growing number of cities are embracing cycling as a preferred transportation mode, and when cities provide sufficient cycling infrastructure the viability and attractiveness of cycling in urban settings becomes readily apparent.

Copenhagen is the cycling capital of the world.  One-third of daily commuters choose the bicycle.  Over the past twenty years Portland, Oregon has transformed itself into one of the most bicycle-friendly cities in North America, making cycling an important cog in the wheel of transportation options.  Bicycling.com offers a list of America’s Top 50 Bike-Friendly Cities.

Closer to home, Auburn University has done a lot over the past several years to encourage cycling.  In fact, we were the first, and so far only, college or university in the state to achieve Bicycle Friendly University designation by the League of American Bicyclists.  Part of the reason Auburn earned that recognition stems from the leadership of Parking Services through their creation of the War Eagle Bike Share.  The Recreation and Wellness Center’s Bike Shop also played a key role in helping us achieve the Bicycle Friendly distinction.  The Bike Shop offers Rec and Wellness Center members an opportunity to rent bikes; repair and maintain bikes; borrow tools; and meet up with fellow cycling enthusiasts to plan rides and adventures.

Whatever you want to call it, the Laufmaschine, the Draisine, or the bicycle, this 200-year-old technology was revolutionary at the time, and today the bicycle is still contributing to greater mobility, healthier people, and more livable communities.  Amazing!

(While the 200th anniversary of the bicycle passed rather quietly, a variety of sources did cover the story: Irish Times, treehugger.com, the BBC, New York Post, and so on.  The July 24-31 issue of Sports Illustrated includes a very informative article by Austin Murphy that includes the invention of the mountain bike.)