There are many vulnerable communities around the world whose livelihood challenges are exacerbated by climate change. In this blog post, I would like to introduce readers to the problems of peri-urban communities. In India, peri-urban communities live at the fringes of highly concentrated urban centers, in high-rise apartment complexes and informal settlements. The problems that peri-urban residents face in India are similar to those faced by urban and rural communities in terms of general climatic trends– hotter summers, devastating flooding and dramatic weather shifts. We can look at peri-urban communities in India to see the specific ways that residents experience water stress and grapple with problems diverting and treating their sewage in safe ways. We can then see these problems in the context of climate changes that affect water availability and quality for human consumption.

According to the think tank the World Resources Institute-India (WRI), India is in the midst of an urban transformation. The population growth in cities is outpacing growth in rural areas by far. From 1981 to 2011, the urban population increased from 23.3 to 31.2 per cent.  In 2015, India’s urban population reached 420 million, and accounted for 33 per cent of the total population in the country. In addition to the megacities of Mumbai, Delhi, Chennai, Bangalore and Kolkata, large towns are establishing the second tier of urbanization. Constituting this large town category are cities with populations around a million or more. Between 2001 and 2015, the number of cities with a population of a million or more increased from 35 to 53.

The liberalization of the economy in terms of business deals and trade is pushing the pace of urbanization. Favorable environments in terms of services and tax breaks have been created for the private sector and for speculative investments in real estate. Corporate parks for IT and other industries are expanding in the peri-urban fringes where land is cheaper than in the urban core. In the midst of all this growth, the build out of basic water and sewer infrastructure cannot keep up. This means that many peripheral zones of growing cities, or the peri-urban areas, lie outside the city’s grids for water and sewerage. In these off-grid conditions, residents and workers must find their own water sources and create their own sewerage facilities.

The first source for these communities is groundwater but groundwater levels are rapidly depleting in peri-urban areas and the water is of varying qualities and often not suitable for drinking or even bathing. In some locations where groundwater levels are critically low, the government has issued a ban on groundwater extraction. In those locations, such as southern regions of the Delhi metropolis, communities must look for other sources of water. People living in informal or low-income settlements and even residents in high value apartment complexes are forced to purchase water from private companies, and this is supplied to them via large tanker trucks. The prices charged for this “tanker water” are generally higher per kiloliter than the prices charged by the government for piped water. So people end up paying more for water. Additionally this tanker water is of questionable quality—there are no monitoring agencies to ensure that quality is adequate for household consumption. Some families do not use this tanker water for drinking and prefer to buy bottled water that has some quality assurance from the bottling companies. Bottled water is even more expensive.

What does all this have to do with climate change?  Climate changes in India involve increased drought and water stress in some regions and at times severe flooding in other areas as monsoon paths are altered by temperature changes and other ecosystem functions. The most vulnerable peri-urban areas are in the drought prone regions such as the peri-urban areas of Bangalore, Chennai and Delhi. In times of drought and during the longer summer months, residents scramble to purchase private water supplies and the tension to pay for them causes increased stress.

Likewise, sewerage services are planned after building these apartments and are often add-ons to the local infrastructure. Some apartment complexes have their own sewage treatment plants but the communities that can actually finance and produce their own recycled or reclaimed water are the upper income communities. Lower income communities are not able to afford the installation and operation fees for these facilities. So they are more vulnerable to shifts in availability of tanker water and groundwater. When climate induced drought occurs, it puts additional pressure on water supplies and peri-urban communities become more desperate to procure water in a private market where prices rise in times of scarcity. Groundwater depletion is also accelerated by drought conditions because urban residents and farmers need to extract more groundwater as surface waters dry up.

This community is located outside the urban region surrounding the Taj Mahal. They receive a small amount of piped water from the government municipality, but then have to purchase drinking water from an ATM. Some residents with more income generation can have a borewell dug for them and purchase their own pump. Then they can extract groundwater and store the water in tanks on their roofs.

In another residential community outside Bangalore, community members have installed their own sewage treatment plant and use the treated water for gardening. This is one of several strategies for peri-urban resilience, as communities face water security challenges in a changing climate. You can see in the first video below what wastewater looks like at the beginning of treatment in a small-scale system for a residential community. In the second video, you can see that the treated wastewater looks pretty good and can be used safely for gardening and watering dry and drought prone areas.


The next community is an upscale residential complex in peri-urban Bangalore. The apartment has no piped water connection from the government and must procure their water from borewells. Recently their borewell ran dry. They purchase water from tanker trucks and recycle their own sewage water for reuse in their gardens and for flushing their toilets. Imagine how much water is used to flush toilets and how much fresh water they can save by using recycled or reclaimed water!! For them resilience means organizing as a housing association and maintaining their own wastewater treatment and reuse plant, collecting rainwater, and thinking prudently about water use. 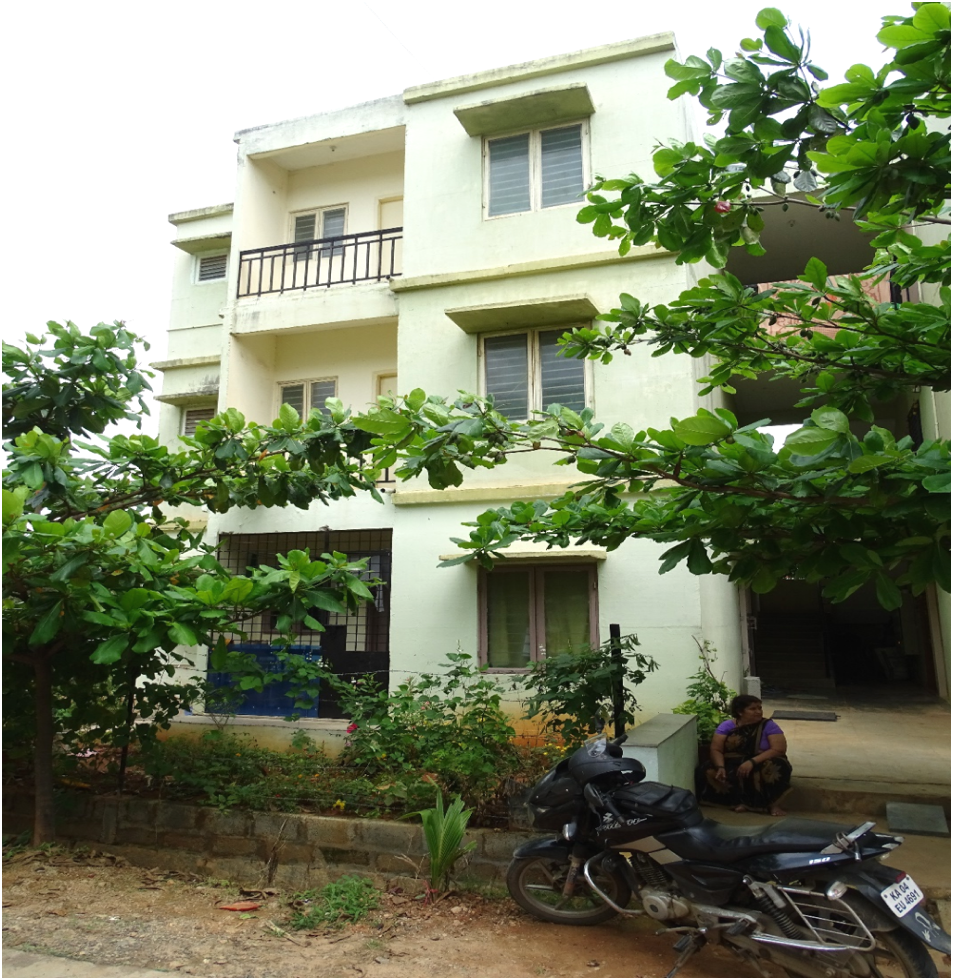 A resident waits for the private water tanker to arrive. Photo by Kelly Alley.

The next community is a low-income government housing project set up under the Rajiv Gandhi Rural Housing Corporation. A local nongovernmental organization created a baffled reactor to treat their wastewater. This is like a large septic tank with many chambers. Unfortunately, the reactor gets clogged and the sewage backflows into their homes. They do not have the financial capability to get the baffled reactor cleaned (to get the sewage sucked out) and they are unable to flush their toilets effectively. Their drinking water supply is connected to a large water tank connected to a borewell. The borewell pulls up groundwater but the government-appointed manager of that borewell does not turn the pump on often enough to give them a consistent supply of water. These residents are then forced to buy water from a private tanker truck. This is an example of a lack of coordination between governmental and nongovernmental agencies and residents of the housing association. All need to participate to ensure that water and sewer systems are maintained and used equitably. Resilience in this context would mean ensuring coordination between governmental and nongovernmental agencies and resident associations to help low-income communities meet their water and sewer needs.

Household water security is a concern for peri-urban communities in India and around the world. The examples show a few of the ongoing problems that residents have. As climate changes put fresh water resources at greater risk, by inducing drought, heat waves, coastal inundation and flash floods that wipe out critical infrastructure, residents are identifying where and how problems can be solved. This blog provides a few examples of community responses to water and sewage problems that build resilience in peri-urban zones.