Having worked at Auburn for the past 13 years as an Environmental Health and Safety Specialist, Michael Freeman plays a huge role in keeping Auburn safe and beautiful. Michael and the rest of the Risk Management and Safety Department are also one of the biggest proponents of sustainability on campus. 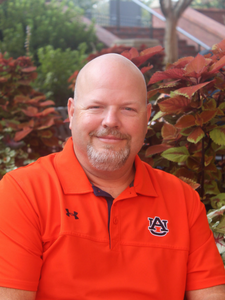 Michael wanted to become a Peers Ambassador because of how closely the program aligns with his actual work. At RMS, Michael aids in everything from chemical spill response to overall waste management. He also helps faculty and staff align with environmental compliance policies and encourages them to adopt sustainable practices. Because he does this type of work every day, Michael thought he would be able to provide valuable insight to the other Peers Ambassadors. He also appreciated the opportunity to collaborate with like-minded staff and learn ways they have been incorporating sustainability into their areas on campus.

Out of everything Michael has done with the Peers Network, his favorite aspect has been getting to know others who are trying to make the world a more sustainable place. While Michael has enjoyed many of the Peers gatherings, the Interface Carpet tour sticks out in his mind. He says it was inspiring to see a commercial company founded in sustainability. Whether he is interacting with the other Peers Ambassadors or the hosts of the monthly Peers gatherings, Michael says he always comes away feeling like he has learned something worthwhile.

At RMS, Michael has already implemented several significant sustainable practices. The RMS department prioritizes waste minimization and reusable mindsets. Often, they also go above and beyond what is expected of them. For instance, Michael and the rest of RMS take it upon themselves to recycle batteries that could technically be thrown away like any other trash.

However, Michael knows the harm batteries pose to the environment when left to degrade in landfills, so he exceeds expectations by sending them across the country to be recycled.

This is also a way Auburn is a step ahead of other universities when it comes to sustainability.  As of now, Auburn actually has to pay for these batteries to be recycled. It is people like Michael and institutions like Auburn that are making real strides for sustainability.

In addition to what he is already doing, Michael has plans for further sustainability improvements. He plans to expand the Battery Recycling Program, a project the Office of Sustainability has taken under its wing as well. Currently, Michael and the Office of Sustainability have battery recycling bins in 24 different locations around campus. Every couple of weeks these batteries are collected, processed, and sorted. After just the first collection, 114 lbs of batteries were sent off for recycling!

Out of all of the amazing sustainability initiatives Auburn has and is currently undertaking, the massive amount of construction around campus inspires Michael the most. Today, there is a major push to reduce the environmental impact of our buildings, both before, during, and after their construction. Out of this push, the U.S. Green Building Council has developed a rating system called LEED (Leadership in Energy and Environmental Design). This system’s goal is to assess and encourage green building. Auburn has committed to only constructing buildings that are LEED Silver or higher. Michael believes this commitment to sustainable buildings is a great step considering Auburn is in the midst of their biggest expansion in history. However, he also says that there is always more to be done. Sustainability is a global issue and therefore operates on a global timeline.

Michael believes the greatest challenge to sustainability is not a matter of logistics or economics, but instead a matter of mentality. In a perfect world, he says sustainability would not have been transformed from a fundamental human problem to a polarizing issue in politics. Michael thinks real change will happen as more and more people become open to sustainability and learn what it is actually all about. In general, when people think of sustainability, the first thing that comes to mind is recycling. While recycling is an important aspect of sustainability, concepts like economic viability and social equality are just as important. In the end, Michael thinks people tend to value the same things. We all want clean water and air. We all want a fair shot at our goals. We all want to feel included. If sustainability shifts away from its political stigma, perhaps people will grasp the global unification potential of sustainability. Creating a sustainable world will be an accumulation of seemingly insignificant changes and people like Michael Freeman are helping us to get there.