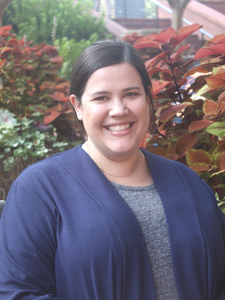 Maiben Beard came to Auburn University in 2008 as the Outreach Associate for the Caroline Marshall Draughon Center for the Arts and Humanities, a position she still holds. Her roles include increasing publicity for the department, planning events, and collaborating with faculty at Auburn and surrounding communities. Maiben’s favorite aspect of her job is traveling throughout the state and meeting new people through her work to promote the arts and humanities. She really enjoys the traveling exhibit her department helps plan and implement, where a speaker series is held in different libraries throughout Alabama.

After getting an email about the program, Maiben applied to be a Peers Ambassador as an opportunity to understand more about campus sustainability initiatives. Because Maiben works away from the core of campus, at Pebble Hill, she also wanted the chance to meet and connect with like-minded people on campus. When at Emory University for her undergraduate studies, Maiben was involved with their campus recycling and biofuel use efforts, giving her previous experience in the area. She says sustainability has always been in the back of her mind, and joining the Peers Network was a way to bring that interest forward.

Maiben’s favorite part of the program so far has been getting together with the other Ambassadors at monthly lunch gatherings to discuss various topics of sustainability. She’s also learned about university efforts at the training sessions, and now has a better understanding of what’s currently happening on campus, leading her to look for future improvements. At the training sessions, Maiben has also enjoyed learning the vocabulary of sustainability, and hopes to use the knowledge when interacting with different groups of people from various backgrounds.

Pebble Hill, home of the Caroline Marshall Draughon Center for the Arts & Humanities, is located on Debardelaben Street to the east of central campus.

Maiben’s unit in Pebble Hill already demonstrates several sustainable practices, including a focus on making their events green. After realizing how much waste can be produced from one event, they’ve aimed to combat this by using reusable food platters and drink pitchers; replacing microphone batteries with rechargeables; and ordering other needed products from the Staples Sustainable Earth Line. Maiben explains how these changes were fairly simple to implement because the small size of her unit allowed for effective discussion and cooperation throughout the process.

Looking forward, Maiben sees room for potential improvements within the events by focusing on the sustainability of catering companies from which they order food. She would also like to consider the energy use in Pebble Hill and maximize its efficiency on work days, when only a few people work in the building, and during events, when close to a hundred people can be present.

When asked about the greatest challenge to sustainability in her work, Maiben discussed reaching people who don’t get the point and how to have a meaningful conversation with them. Often times, people get stuck in a certain way of doing things and motivating them to change can be hard. This can be especially inhibiting to sustainability movements, when what’s being proposed may require more effort or a perceived increase in difficulty.

However, Maiben also sees the positive work being done toward sustainability, especially here at Auburn. She appreciates the Gameday Recycling program because it captures a large audience and gives a visible presence to the issues of waste. By incorporating recycling into the Auburn tailgating culture, fans get a chance to help reduce waste by recycling their cans and bottles on Gameday.

If interested, you can learn more about the Peers Network and meet the other Ambassadors.