The Resourceful Nature of Fijians

There are countless things I learned during my four-week journey on the small, North Fijian island of Vorovoro from winding fish lines on bottles to cooking every-day meals. I saw, first-hand, what the gender roles looked like and the importance of tradition in the Fijian community. But, one thing that was very apparent and equally as interesting to witness was how resourceful the natives were.

Every morning we would all gather in the Grand Bure for our daily meetings to discuss what the day would entail. During one of our first meetings, Tui Mali (Chief of Mali), gave us a piece of advice I will never forget- “Be good like the coconut tree.” He explained to us that every part of the coconut trees on Vorovoro are utilized. The leaves are used to weave and after the coconuts are processed, the husks are used to start fires while the juice is used for cooking and hydration, the fruit is shaved and used for cooking or milk or oil, and the shell is sanded to make bilos. He advised us to make ourselves useful and work hard. That was the first time I realized how extremely sustainable their way of life is.

About midway through the trip, Poasa, the youngest brother of Tui Mali, took us on a medicinal plant tour. We were introduced to all types of natural remedies that the Fijians swear by. From commonly-known plants like aloe vera for skin ailments, to rare ones such as bosucu for stomach aches and mulomulo for mouth sores, it seemed that just about each plant on the island served a purpose. 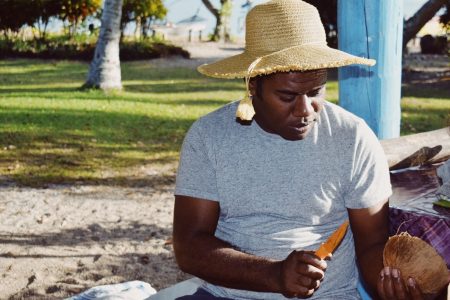 Aside from the coconut tree speech and the medical plant tour, it seemed that the Fijians utilized every part of their beautiful island to contribute in some fashion. Just a simple walk through our camp was a testament to that. The walls of our vales were constructed from weaved bamboo and a great deal of the roofs consisted of some form of leaves.

Perhaps the most interesting thing to see was how resourceful the Fijians were in the kitchen. As if I wasn’t already impressed enough by Misi’s mad skills in his small, four-stove and brick oven kitchen, I was able to witness my homestay mom’s outdoor, make-shift oven. It was our first day in Vessi and my mom wanted to teach me how to make kasava cake. We prepared the batter in about 30 minutes before I watched her build her own oven. She first built a fire on the ground, then stacked a piece of tin over the fire, placing the pan with the batter on top. She proceeded to cover the pan with a round bowl-type dish, then covered the dish with another piece of tin. She started another fire on top of the second piece of tin and allowed it to cook for about an hour. Besides the fact that the kasava cake was one of the best desserts I have ever put in my mouth, I was intensely impressed and a bit overwhelmed at how smart and resourceful she was in building such a contraption.

Being able to witness the Fijians’ great ingenuity really opened my eyes to how wasteful and spoiled we are as Americans. We have so much to learn from less-developed countries and I believe it would do us so much good as a country to realize that we don’t have all the answers.