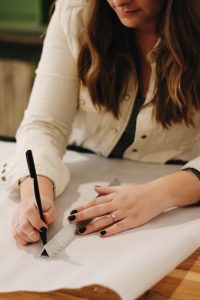 Laura works to incorporate sustainability into her coursework in Interior Design.

I have been hearing the word “sustainability” since my first day of class at Auburn. As an interior design student, the term is often thrown around by our professors. We have a responsibility to select finishes and materials that are beneficial to the environment and that are not dangerous to inhabitants of the building, whether that mean material off-gassing, durability, or flammability. I have always thought of this as a goal in design, but I never really grasped the importance or magnitude of the topic of sustainable design until I was introduced to LEED. Learning the LEED building standards and ratings in my materials class sparked my interest in sustainable design. When I realized what a challenge it can be to construct a building to be LEED certified, it seemed daunting, but was also fascinating.

This class was the last I paid much attention to it until I heard about USGBC on Auburn’s campus. In the fall, I came across some posters advertising the next USGBC meeting and thought it would be interesting to attend. When I showed up, hardly anyone was there, which made me feel bad for the leaders of the club. An architecture professor spoke about global warming and how design can truly impact the environment, and it made me realize just how easily we could keep from harming the earth if we simply put in the effort. At the end of the meeting, the president of the club made an announcement that they needed to elect officers for the coming semester, and I thought to myself, “why not?” I raised my hand and offered to be graphics chair, and since no one else was vying for that position, I got it.

There were two other students who took a position. We had a few meetings over the next month to prepare to take over the club, but soon a problem arose. The student who signed up to be president/vice president contacted us and said he was no longer able to be involved. Without a president to lead the club, and with only one person other than me in a leadership position, I knew the club would not survive due to its already low attendance. My newfound desire to bring more awareness of sustainability to Auburn’s campus did not look promising. I spoke to the professor who oversees the club and decided if I wanted to be involved in USGBC and keep the club alive until the end of the year, I needed to step up as president. I had been nervous about taking on such a big position, having only been a member of the club for a month, but knew no one else was going to do it.

Since I have taken on the role of president, I have acquired a great team of officers to fill all the empty positions, and they have been so supportive. Now, mostly interior design students are running USGBC, and we are trying to reach out to other colleges and design majors to increase involvement. I am so excited to be a part of raising awareness for sustainability on Auburn’s campus and hope to spark new interest that will be carried into our future careers as designers.