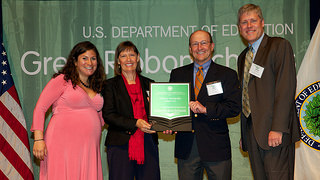 In June of this summer the Director of Academic Sustainability Programs, and Nanette Chadwick, and I traveled to Washington D.C. to receive the U.S. Department of Education Green Ribbon Schools Award on behalf of Auburn University.

This was a big deal, the first year the award was open to colleges and universities.  Auburn was one of nine institutions of higher education across the country to be selected.

When we learned about the award application last fall, we thought it was a good opportunity to tell Auburn’s story.   We had to describe our efforts in three areas: reducing environmental impacts and costs, improving the health and wellness of students and employees, and effective environmental education including the sciences, civic skills, and green career pathways.

We had a lot to say, and filled 21 single-spaced pages, the upper limit of what was allowed.  We could have said more.

The event in D.C. was great fun.  There were K-12 schools and school districts represented from every state, plus nine higher education institutions from around the country.  Secretary of Education Arne Duncan spoke passionately about the importance of sustainability to 21st century excellence and the work the awardees are doing to prepare students to contribute to that future.

When we were called up to the stage to receive our award we got the largest applause and cheers of the entire event.  Turns out there were several Auburn grads among the schools there to receive their own awards.

At the reception afterward we got to hobnob with legislators and their staff, folks from the U.S. Green Building Council, and other awardees.  It was a happy, friendly celebration.

After returning to campus I received a lot of congratulatory comments, which provided a good opportunity to let everyone know that Auburn University as a whole deserves congratulations.  It was the efforts of people and units from all over campus that earned the University this award.

Sustainability is a journey for ongoing progress, and it is nice once in a while to have our efforts recognized.  While we celebrate we also know there is so much more to be done, and everyone can play a significant part in creating the next chapter of Auburn’s journey toward 21st century excellence.