Are You Registered to Vote?

Home » Blog » Are You Registered to Vote? 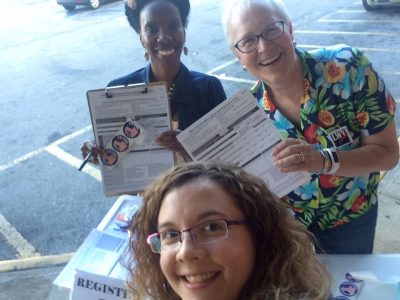 One of the many things LWVEA does is help people register to vote.

“Are you registered to vote?” Says a smiling lady holding a clipboard and standing outside the grocery store, or the community center, or at CityFest. Chances are, that friendly face belongs to a member of the League of Women Voters of East Alabama.

The League of Women Voters (LWV) is a nonpartisan political organization that encourages the informed and active participation of citizens in government, works to increase understanding of major public policy issues, and influences public policy through education and advocacy. LWV is a national organization with state and local chapters, including our chapter, the League of Women Voters of East Alabama (LWVEA). A group of politically-minded women at Auburn University formed the LWVEA 61 years ago, and it continues to be a vibrant organization that encourages voter participation, engagement in state and local politics, and awareness of political, environmental, and social issues that affect people living in East Alabama. Membership is now open to anyone at least 16 years of age.

We believe that civic engagement leads to more efficient and effective decisions and it is a core principle of our democracy! We are a government ‘of the people,’ which requires our citizens are informed and engaged. To this end, we hold monthly public meetings on topics ranging from water quality in Auburn and Opelika and renewable energy in Alabama to the immigrant detention center in Etowah County and prison overcrowding.

LWVEA strongly encourages members of our community to get involved in the decisions of its government, especially at the city and state levels. Many of our members regularly attend meetings of the Auburn/Opelika and Loachapoka city councils, as well as meetings of other city and county commissions. A robust democracy requires more than just casting a ballot for president every four years. Healthy communities grow when citizens talk to each other, share ideas, and work with elected leaders to build a vibrant city. We want residents to speak up if they want more green space, improved recycling options, or different kinds of housing options! Local residents should not feel intimidated about contacting their elected representative about the issues in their town. City council members want to hear from their constituents because democracy works on a small scale, in communities like Auburn, and all around the country.

In addition to informing citizens about political issues, LWVEA works diligently to get East Alabama citizens to the polls for every election. We hold voter registration and election awareness events, where we ask strangers more than just, “Are you registered to vote?” We ask them if they know their polling place, if their voter information is correct, and encourage them to make a plan to vote on election day. As a college town, Auburn sees an influx of new residents at the start of every school year, and we do our best to get those new residents registered to vote. Many new residents have moved to the Auburn/Opelika area from other states, and are unfamiliar with Alabama election laws, such as the photo ID requirement, absence of early voting, and voter registration deadlines. We try to share that information as clearly as possible, to minimize confusion at the polls. We direct them to the alabamavotes.gov, which is the Secretary of State Elections website to register online and get more detailed election information.

We also try to dispel a lot of myths about voting and elections in Alabama. For example, Auburn University students are often unsure about whether or not they can register to vote in Auburn, even though they only live
here during the school year. We tell them that by state law, students living in Alabama are allowed to register to vote where they go to school. We also try to clear up confusion about the process to obtain an absentee ballot, and help them identify their polling place.

2018 is an important election year and we encourage voters to show up at the polls on June 5 (statewide primary), August 28 (City of Auburn mayor and city council), and November 6 (statewide general election). For more information about local political races, check out Vote411.org, which will include all you need to know about where to vote, which races you will be voting on, and information about candidates for each race.