By adminJanuary 8, 2019No Comments

Over the past month and a half, I have been all over the world. My journey started when I landed in Dunedin, New Zealand, and it ended in Nadi, Fiji. Now I know what you are wondering how that could be an “eye-opening experience” when it sounds like the vacation trip of a lifetime. In some ways you would be right, as it was in many ways. However, I learned so much from the places I visited, the differences in culture, and the friends I made. My name is Ethan, and I am a rising sophomore this year at Auburn University. I went on this trip to learn about sustainability and get credit for my sustainability minor, but I got so much more. It changed my world view, and now it is my turn to hopefully share a piece of that with you, the students of Auburn University who might also be interested in going on such an adventure.

I began my odyssey in the Nashville International Airport where I said goodbye to my parents and my grandmother and stepped onto a plane. At first, I really questioned whether or not what I was doing was really real at all. It all felt so surreal. I was honestly dumbfounded and all I could think was “I am going to New Zealand.” By the time I had landed I was still in a state of disbelief. I could not believe I was in one of the most beautiful places in the entire world. Instantly upon arriving I could tell I was not in Kansas (Alabama) anymore. Everything was so different; it did not matter that New Zealand is a westernized country. Cars were on the wrong side of the road, and everyone had an accent or rather I had an accent. I did not even know what kind of coffee to order because I had never heard of them before. Luckily, the locals were nice and smiled and helped me out. One of the things I immediately noticed in New Zealand was that invasive species and foreign bacteria are something they take very very seriously. In customs in the airport they had signs everywhere declaring that if you have any fruit, food, or any organic matter you need to dispose of it now or you could possibly be fined or even detained. There were all sorts of questions on the customs form like have you been in an outdoors environment anywhere recently, have you been camping or hiking recently, and are you carrying any outdoor equipment with you. Being the ever-outdoorsy person, I was really nervous because I had to answer yes to all of these questions. When I finally got to the lady in charge of my line I was double checking myself to make sure I had honestly answered all the questions on the form and that I had not lied about anything. In the end it was fine, as she asked me a few more questions and then I was on my way to New Zealand. 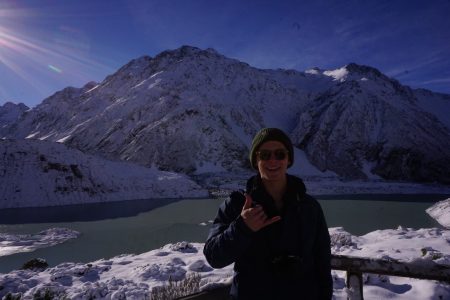 The focus of our trip was to learn about sustainability through eco-tourism, cultural tourism, and simply visiting New Zealand and Fiji. Afterwards we are to be asked how we can share what we learned abroad and relate it back to Auburn to see how we could possibly improve our university for ourselves, our fellow students, and our environment. Our first educational activity was eco-tourism in New Zealand. One of the major problems in New Zealand is the invasive species that were brought over by first the Maori and later the Europeans. As you may know, New Zealand is particularly known for its wide variety of indigenous birds. We have all heard of the kiwi bird after all. But a big threat to the kiwi and other birds are invasive mammals since there are no mammals indigenous to New Zealand other than the whale and the dolphin. When Europeans arrived, they wanted a game animal to hunt for its fur like they would do back home in England. So, they brought over rabbits from England and possums from Australia. What they did not know, was that without any natural predators the populations of these animals would rise uncontrollably. This would eventually lead to problems with their main export at the time, wool. Because of the overpopulating of possums and rabbits there was no food or grass left over for their herds to eat; to counter this problem they introduced yet another species to the island, the stoat. A stoat is a weasel-like animal similar to the mongoose that will essentially kill any other animal it can. As you can probably guess, this didn’t work. The stoat killed the rabbits and possums, but it did not stop there. They also went after the indigenous birds of New Zealand. They managed to drive forty-five percent of New Zealand’s bird species to extinction. What we can learn from this is that the introduction of invasive species can be very damaging. If you are from Alabama you know what kudzu is and how much of it has taken over our trees. In Auburn we could make a conscious effort to avoid planting unnaturally occurring species on our campus and be more aware that our actions have consequences on the environment.

My adventure continued in Fiji on the tiny uncharted island of Vorovoro. It was here that my world view and my outlook on life were utterly shattered and altered. I did not know what to expect when they said we would be living on a remote island with a tribe, and what I imagined was nowhere close to my actual experience. It was very refreshing. The way we lived was clean and sustainable for the most part. We used only solar power and collected rain water for drinking and bathing. This was the furthest from modern western culture that I have ever experienced. Next to nothing was wasted on the island. As Tui Mali once explained “to be good is to be like the coconut tree. Be good like the coconut tree. All parts of the coconut tree are used from its coconuts, to its leaves, and to its trunk.” Not even our waste was wasted. We used composting toilets that would repurpose human waste into a nutrient rich manure. Showers were rationed to two a week. We did not eat to excess; we ate exactly what our bodies needed and we ate healthy too. What Auburn could learn from our experience is that we do not always need more. We need only use what we already have. We have untapped power coming from our sun that can be converted into electricity. We should not take more than we are going to use whether it be food or something we can all relate to as students, such as paper.

On Vorovoro we could see the excess flowing from the nearby city of Labasa in the form of the trash that litters the island’s beaches. Most obviously we could use less plastic and invest in reusable water bottles. Auburn has already made great strides in that. Offices from around campus have worked with Facilities Management to bring recycling bins into every nook and cranny on campus as well as installing the “Weagle Water” filtered water stations that you see on campus as well. As college students we have the power to make these changes. We have the power to lessen the amount of waste we generate. If it were not for us there would not be an Auburn University, so why not exercise that power?

Studying abroad opened my eyes to the amount of waste we as Americans and as Auburn students generate. I have seen firsthand how our actions affect our environment, mainly in the form of climate change like in New Zealand. It has made me open my eyes to see that there are things we can do as students to make our university a better place for everyone and the environment. So, no, studying abroad in New Zealand and Fiji is not just a vacation of a lifetime; it is a life-changing and mind-opening experience that will change your outlook on the world for the better and for as long as you live.