An ‘A’ for Alabama Kids Means Moms are Getting Active

In 2016, shortly before the election, my family and I moved here from Amherst, MA. I am a mother of a five-year-old, and there are many issues that concern me in today’s world but the one that stands out, above all, is my urgent concern towards climate change.

At the 2014 UN climate summit, Leonardo DiCaprio said, “I am not a scientist, but I don’t need to be. Because the world’s scientific community has spoken and they have given us our prognosis, if we do not act together, we will surely perish. Now is the moment for action.”

I agree. Often times, much like the moment when I wrote this, I am up in the middle of the night thinking, “we’ve got to do something, and do it NOW!” the spark ignites, and the next day, (or often right in that moment) I am set into action. Whether it’s planting a garden, telling my daughter she is a super hero for turning off lights and using less paper, calling a manufacturing company to change their packaging, or simply posting a sustainability event on GAIN Green Action Information Network on Facebook, I’m doing something.

But, as Leonardo also mentioned in his UN speech four years ago, it’s not just about the little things anymore. It’s critical that we speak up and be heard by our legislatures. It’s time to step out of our comfort zone and make “the ask” —   to change public policy. It is one of the most impactful ways to send a signal to big industries, as their consumers, to give them direction, and by being in compliance (or not) with the law, it allows us to hold them accountable, should the need arise.

Shortly after we arrived in Auburn, with this in mind, and hope in my heart, I started stepping out of my personal comfort zone, and in various meetings of socially active groups, I began to express my wish “to do something.” I was pleasantly surprised, and to my relief, found other mothers that shared the same concern about global warming and the same hope. 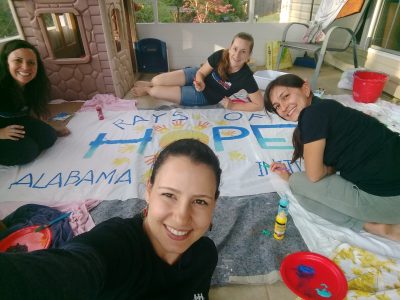 When I had left Amherst, MA, I was just starting to get involved in a nationwide organization called, “Mothers Out Front — Mobilizing for A Livable Climate.” The mission of Mothers Out Front is, “to build our power as mothers to ensure a livable climate for all children.” And how to achieve this main goal we find in the values, “Together, we are powerful and we use our power to move decision makers to take actions that will ensure a healthy environment for all children.” I wanted to bring this with me to Alabama, and so in early 2017, along with the mothers who had now become friends, we formed Alabama’s first community team, “Lee County Mothers Out Front- Mobilizing For A Livable Climate.”

This spring marks the initiation of our first campaign — just in time for Earth Day and Mother’s Day. We are launching the Alabama Solar Initiative 2018; in which we seek to gain thousands of signatures of mothers, caregivers, and others across the state to join us on our mission to make Alabama “solar friendly.” After consulting with Huntsville’s Daniel Tait, CEO of Energy Alabama, an expert in renewable energies, we carefully crafted our petition to focus solely on, “Third-Party Solar Ownership” to be expressly allowed by Alabama law. We addressed the petition to our state legislatures. We are asking them to revise and resubmit a bill similar to House Bill 277 (2016) sponsored originally by Rep. Ken Johnson (R), who is now retiring.  We are calling within the House of Representatives, for a new champion.

I am not an expert at this, learning as I go; who to talk to, what to say, and gaining a real-time education on how our political system works on a local, state, and federal level. But one thing is clear, from my own experience, and what I’ve seen across the country — there is a powerful and effective way to make change with decision makers — and the common denominator seems to be; let them know explicitly what you want and invite them to work together with you — not against. Allow for a connection to be made, a common thread, so that your combined efforts and purest intentions produce a truly beneficial outcome for all, and the right action is experienced by all.

Our local team, Lee County Mothers Out Front, has expressed excitement about the movement around the Alabama Solar Initiative 2018. We want an “A” for Alabama, where we envision all the “players” as champions for the state of Alabama; for renewable energy and a thriving healthy economy, with a free market, and a new industry bringing in jobs and paving career paths. This enthusiasm has led us to meet individually and collectively with: US Senate field directors, Public Service Commissioners, Candidates for State Senate, Governor, Attorney General, Supreme Court Judge, and a newly elected official to the United States, Senator Doug Jones. Anyone who is a public servant can be approached through various points of contact, email, letter-writing, public forums, tweeting, Facebook posts, etc. I have seen several moms who were introverts and shy, long since surpassed their fears, in the name of a brighter future for their children.

This is what I am looking for when I reach out to my representatives — to get to the point where we get to know each other just a little bit more, enough to be able to get past the gridlock, and get to work.