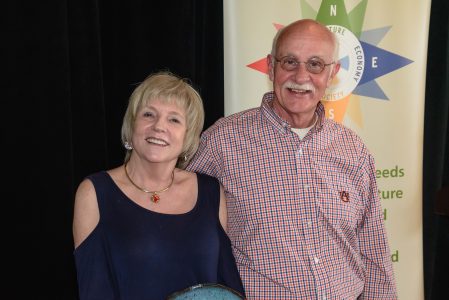 The Steads graciously accepting their award.

Dr. Jean Garner Stead and Dr. W. Edward Stead received undergraduate and master’s degrees from Auburn University’s Harbert College of Business, and PhDs from Louisiana State University. They are among the earliest pioneers in the field of sustainability in business. In 1990, the beginning of the sustainability movement, at East Tennessee State University the Steads developed and taught the first course in the United States in environmental management. That same year they published what became a heavily cited, classic article on ethical business behavior in the Journal of Business Ethics.

In 1992, the Steads published the first book on sustainability in business, Management for a Small Planet, now in its 3rd Edition. When it was published, this book received the American Library Association Choice Outstanding Academic Book Award. In the words of one reviewer: “This book explains in lay persons’ terms why businesses need to treat this planet as the ultimate stakeholder.” In 2004, the Steads published the first book integrating sustainability into strategic management, Sustainable Strategic Management, now in its 2nd Edition. Both books are widely used as textbooks around the world.

In 1994, the Steads were founding members and officers of the Organizations and Natural Environment Division of the Academy of Management, the international professional organization of management professors.

The Steads have played a significant role in the business world’s embrace of sustainability. None other than Herman Daly, founding father of ecological economics and Jean’s former professor, has said of the Steads: “Ed and Jean Stead continue to enrich the management literature with a perspective that firmly roots the economy and its organizations within the constraints of the physical world.”