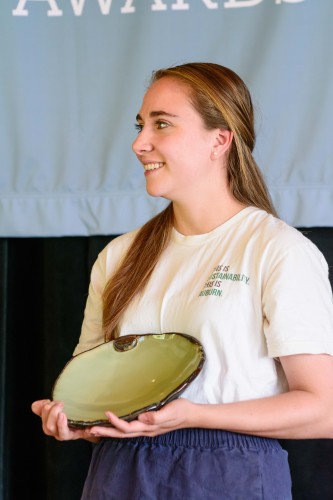 Rachael is an energetic, joyful, and engaging leader with a specific passion for ensuring food security for those in need, and she has had a significant impact on campus and in the Auburn community.  It is only a slight exaggeration to say that one could fill his or her social calendar with events organized by Rachael to benefit the East Alabama Food Bank and other initiatives that address hunger and food insecurity.

The Committee of 19 is a student organization that advocates and fundraises for those living in food insecurity.  Rachel has been active in the Committee of 19 for three years, and she currently serves as the organization’s President.  She is Secretary for another student organization and one of last year’s Spirit of Sustainability Award recipients, the AU Campus Kitchens Project, which collects food from on and off-campus dining venues and distributes it to those in need in the Auburn/Opelika community.

Rachael has organized coffee crawls, hikes and races, food drives, and empty bowls banquets as fundraisers and educational events.  Due in no small part to Rachael’s energy, leadership, and fundraising skills the Committee of 19 has been able to donate about $3,000 each year to the Food Bank of East Alabama.  She has advocated for important policy changes in Alabama by bringing a representative from the Arise Citizens Policy Project to campus to explain the need to eliminate Alabama’s highly regressive and harmful-to-the-poor grocery tax.  She organized a Food Stamp Challenge for Committee of 19 members, who pledged to live for a week only on what food stamp recipients can afford to eat.  And she was able to turn even that into a fundraising opportunity by collaborating to find sponsors for the members who participated in the challenge.

Rachael sparked a collaboration between the Committee of 19, Campus Kitchens Project, and the Beat Bama Food Drive so that each group could do more to help the others achieve their goals.  This year she helped start a new initiative, gleaning several thousand pounds of less-than-esthetically-perfect sweet potatoes from farms and donating them to the Food Bank.

Rachael has been such an effective advocate and change agent that in February she participated as the only student on a panel at the Universities Fighting World Hunger Summit at the University of Missouri.  Rachael demonstrates how much individuals and organizations can accomplish when led by commitment, passion, energy, and joy.

Rachael is a senior studying political science and journalism in the College of Liberal Arts.