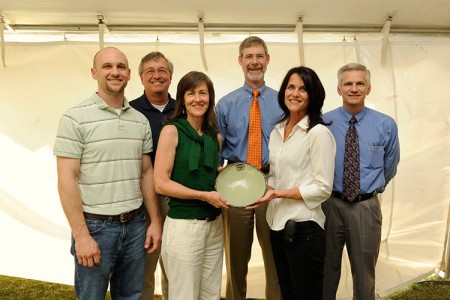 Representatives from OIT with their Spirit of Sustainability Award.

Bliss Bailey, Executive Director of the Office of Information Technology (OIT), oversaw and led the development of this innovative building, in which occupants have worked collaboratively to drive sustainability design and practice. The OIT building was designed to meet two needs. It provides office space for roughly 120 IT specialists and administrative staff. It also contains the primary campus data center—the specially designed and constructed room that houses the servers and storage systems used to provide those services.

Employees of OIT involved in the design process, and members of the design and construction teams, recognized an opportunity to reduce energy consumption within the data center and the office areas by combining well thought out design and emerging technologies. The design also contributes to the reliability of the data center, yielding improved availability of computing resources for the campus.

It was recognized early on that the data center would require an independent cooling system that could be operated on generator power during utility outages. The simple solution would have been to build that independent system, and use it to heat and cool the building all the time. Instead, the design team invested several hundred thousand dollars to tie into the campus chilled and hot water system. Cooling is a major expense in data centers, and it is estimated that this investment will save 20% to 30% on the cost of cooling the computer room.

In addition to investing in infrastructure, the designers also worked to take advantage of existing “free” resources. During cool weather, the computer room is cooled using outside air. Another “free” resource available for use was hot air generated by the servers in the data center. The design team decided that this “waste” heat could be used to help keep the rest of the building warm during winter months.

Recognition of the potential for extreme energy usage in the data center, and the pursuit of LEED certification for the construction project, led to an awareness of opportunities for sustainable and more human-friendly design throughout the entire project. Beyond the obvious need to be energy-efficient, other opportunities were recognized that made good financial sense for the University and good sense for the staff working in the building. A desire to be “green” and to minimize long-term operating and maintenance expenses influenced a wide variety of decisions:

Since the completion of the building, OIT personnel have given dozens of tours of the facility. Regardless of the purpose of the tours, LEED certification and energy efficiency become a part of the discussion. Each of these team members now has a story to tell regarding energy efficiency and sustainability. That story gets told over and over to co-workers, colleagues, clients and potential clients. And that story always includes Auburn University and its commitment to sustainability.