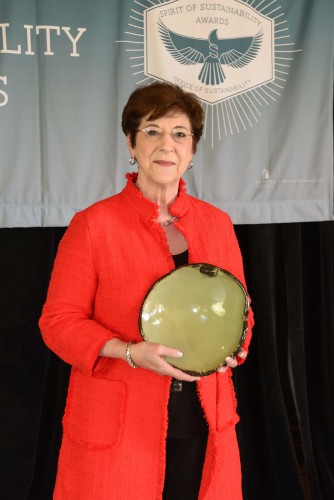 Dean June Henton with her Spirit of Sustainability Award bowl.

June Henton is Dean of the College of Human Sciences, and has been a leader and champion for human and environmental sustainability locally, nationally, and internationally, in academic, governmental, and industry sectors throughout her career.  She co-chaired Auburn’s first Sustainability Task Force with Dean Dan Bennett and helped to make sustainability a strategic priority for Auburn University, both academically and operationally.  Perhaps more than any single individual, June Henton has been responsible for sustainability becoming a strategic priority at Auburn University.

She was a longtime member of the Interface Board of Directors as CEO Ray Anderson and Interface set industry standards for corporate social responsibility and commitment to sustainability.   Alleviating hunger and creating sustainable development have been longstanding passions for June.  In 2004, she led her Human Sciences team to become the lead partner in the U.N. World Food Programme’s Student War on Hunger campaign.  This led to the founding of the Committee of 19, Auburn’s grassroots student organization committed to fighting the War on Hunger.  As National Chair of the Board of Human Sciences in 2006 she developed a White Paper on human sustainable development, which has become accepted as an innovative model for the human sciences profession.

In 2006, June also led efforts that resulted in the launch of Universities Fighting World Hunger (UFWH), modeled after Auburn’s Committee of 19.  UFWH now has more than 300 campus members in the U.S. and several foreign countries.  As a result, students across the country are learning about hunger and committing themselves to making a difference in their local communities.  She led efforts to involve the Association of Public & Land-Grant Universities (APLU) and corporate and nonprofit organizations to partner in the effort to address hunger locally and globally, which resulted in the establishment of the Auburn University Hunger Solutions Institute in 2012. June was instrumental in launching Presidents United to Solve Hunger (PUSH), a commitment by college and university presidents to address hunger.  PUSH was introduced in 2014 and leaders from more than 70 universities in the U.S. and seven other nations have joined the PUSH commitment.

As a leader in the War on Hunger, June was recognized by the White House in 2012 as a Champion of Change for Food Security.  She also received the 2012 Ellen Swallow Richards Public Service Award (presented by the APLU) for her efforts in the fight against domestic and global hunger.  She also received the 2012 U.S. Green Building Council of Alabama Award for Leadership in Sustainability.  Through her leadership a Hunger Studies Minor was created and is offered to students across Auburn’s campus.

Dean Henton has mastered the art of collaboration. She has been able to bring together students, politicians, campus faculty and administrators, industry leaders, and nonprofit organizations to address the issues of human sustainability through education, research, advocacy and action.