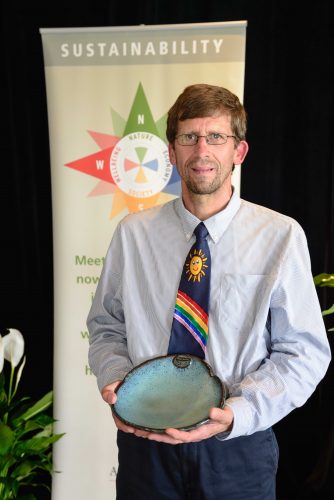 John Kush with his award post-ceremony.

Dr. John Kush is a Research Fellow in the Auburn University College of Forestry and Wildlife Sciences (SFWS). Trained as a forester, John focuses on forest ecology and restoration and he strives to bridge the gap between ecology and forestry to promote wise ecosystem management and sustainable use of natural resources. He is recognized as an Ecological Society of America Senior Ecologist. For John, his chosen field of work is more than a career; it is a vehicle that enables him to have the largest possible impact on something he cares about deeply, the management and restoration of forest ecosystems.

Forest ecosystems have been under assault for generations, yet they remain crucial to the healthy functioning of the biosphere. The restoration of longleaf pine, an ecosystem that once dominated the landscape of the Southeast, is a particular passion. John led a study of factors affecting growth, yield, and carbon sequestration properties in longleaf pine ecosystems. He has also worked in shortleaf pine/oak forests with a focus on restoration.

John has been instrumental in preserving and restoring forest areas on Auburn’s campus. For example, working with Facilities Management, he initiated the removal of invasive plants from Weagle Woods, restoring the health of this longleaf pine forest and increasing the use of a once forgotten part of campus. The area is now used by university classes, guests and alumni on football Saturdays, and increased populations of wildlife. Fostering natural regeneration of this forest enables 250-year-old trees to thrive and endure.

John has also initiated and led many restoration projects across Alabama and the Southeast. For example, in the Flomaton, Alabama, natural area of old growth longleaf pine, he reintroduced the longleaf pine ecosystem supporting influence of fire, which enables this ecosystem to thrive. In 2013, John evaluated the Wade Tract Preserve in Thomas County, Georgia, resulting in its designation as a National Natural Landmark by then Secretary of the Interior, Ken Salazar.

During his career John has published four book chapters, produced over 30 refereed journal articles, and numerous abstracts, presentations, and posters. He has authored or co-authored papers that have been cited by hundreds of researchers.

Perhaps John’s greatest contribution results from his ability to foster students, the next generation of forest ecology and restoration specialists. He has taught numerous courses in SFWS including Forest Ecology and Restoration Ecology, and has directed 18 forestry senior capstone projects. John’s passion and knowledge have endeared him to many who respect him as a mentor, and he has been recognized as teacher of the year four times.

John’s impact can be found in the forest ecosystems he has restored over the past thirty years, and in the students he is preparing to make a difference over the next forty years. It can also be found in the way he has fostered the social and personal wellbeing of those with whom he has interacted, as well as those who will never meet him, but who with every walk in the woods will benefit from his efforts.