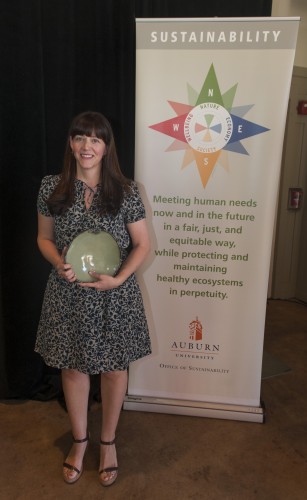 Carlie Bullock Jones with her Spirit of Sustainability Award.

Sustainability change agents combine knowledge, expertise, and skill with a sense of purpose and a driving passion to make a difference.  This is what makes them effective, and is why architect Carlie Bullock-Jones has such an impact in her career.

Carlie has been actively engaged in green building since its infancy, and has dedicated her entire career to bringing about a greener, healthier built environment. Since 1999, she has been an active member of the U.S. Green Building Council (USGBC), where she has made significant contributions to the development and application of Leadership in Energy & Environmental Design (LEED) building standards.  Carlie is recognized as one of the foremost leaders in the environmental design movement.

Carlie has taken on numerous leadership roles in the sustainability community, served as a volunteer and advisor for multiple sustainability-focused organizations, and educated thousands in best practices for “greening” our built environment.  In November, 2012, Carlie was recognized by the Green Building Certification Institute as a LEED Fellow, the most prestigious designation a LEED professional can achieve, one of only 77 in the world at that time.

As the Founder and Managing Principal of Ecoworks Studio, a woman-owned company and Atlanta Female Business Enterprise, Carlie has engaged industry peers in green building and is making a profound impact in her profession on an international scale. With each leadership and service position she has held, Carlie’s goal has been to extend the reach of sustainability and the value of green building practices into mainstream practice through education and advocacy initiatives.

Carlie has received numerous awards, and recently added the Atlanta Business Chronicle’s “Top 40 under 40” Award which highlights business leaders who have made significant career achievements and demonstrated social responsibility.

For more than a decade, she has helped to lead her alma mater, Auburn University, down a path toward sustainability as a member of the College of Architecture, Design and Construction Advisory Council (2002 to 2011) and Dean’s Executive Council (2007 to 2014).

Throughout her career, Carlie has contributed to a number of notable green building projects, many of which accomplished a significant “first.” Among them is the Atlanta Interface Showroom and Offices, a LEED-Commercial Interior project that achieved the first LEED-CI Platinum certification in the world.  Carlie was also involved in the development of Auburn University’s first LEED certified building, the M. Miller Gorrie Center, the first LEED Gold building in the state of Alabama.

Carlie Bullock-Jones is the Founder and Principal at Ecoworks Studio in Atlanta where she continues her work revolutionizing the field of sustainable design.