Ongoing Drought Needs Us All to be Water Wise

Home » Blog » Ongoing Drought Needs Us All to be Water Wise

UPDATE: We’ve received a nice amount of rain here in Auburn over the past month.  Enough rain has fallen for the City of Auburn Water Works Board to lift the Phase II Drought Warning, but they continue to monitor conditions and ask residents keep up their voluntary water conservation efforts.  Despite the much-needed rain, most of the state continues to suffer from drought conditions and can benefit from every drop saved!

Visit any county in the state of Alabama and you will find farmers, towns, and cities attempting to cope with a severe lack of rain.  Due to these ongoing drought conditions Governor Bentley issued a statewide emergency and burn ban. In addition, the United States Department of Agriculture declared over 77% of the state a natural disaster area.

As of early November, locations throughout Alabama would need 4 to 15 inches of rain to emerge from the drought.  Unfortunately, long-range forecasts predict drought conditions to persist, or even worsen, through the end of January 2017.

In light of this situation, the City of Auburn Water Works Board has issued a Phase II Drought Warning, which puts mandatory water restrictions in place for residential and commercial water users. To compliment these efforts, Auburn University has instituted measures throughout its operations to curtail water use, including: reducing irrigation usage; discontinuing vehicle washing; only pressure washing when needed for health/safety reasons; and deferring high water use maintenance activities, where feasible.

You can help our community preserve drinking water supplies by committing to reduce your own water usage.  Whether you live on or off campus, in an apartment, duplex, condo, or house, we’ve pulled together some simple actions you can take to do your part. 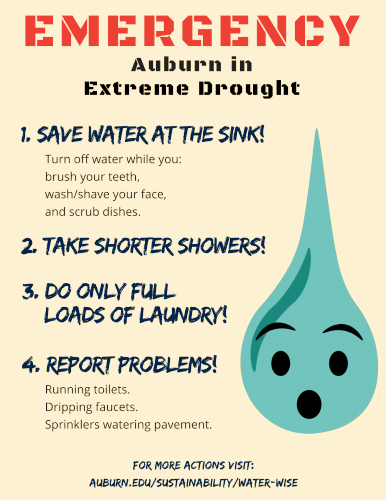 In the Laundry Room

Other Opportunities to Save

Thank you for doing your part; every drop makes a difference!