By adminJanuary 5, 2017No Comments 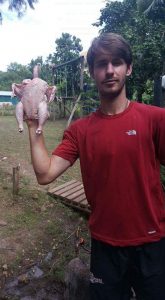 Jacob proudly displays some of his handy-work.

It was day two of Cegu Farms. I had accepted my role as the kitchen boy after having decided to create a cookbook for the Fijians and Chuck and Sue. So rather than handle the bees with the rest of the team, it was my role to do some dirty work around the kitchen. Luckily, there were no vegetarians on the trip and there happened to be some chickens that needed slaughtering for eating. Naturally, I was their guy.  The entire process was made really fun thanks to some good attitudes and hilarious moments, but the part I’ll focus on was the cleaning process.

Once the chicken quits flopping around, it is time to plop it in a basin of near boiling water. It’s important that the water isn’t boiling, or else you’ll literally cook the chicken right then and there. The hot water is meant to loosen up the skin so you can pluck the feathers more easily. Once it is properly plucked, it is time to lop off the feet with a knife and toss them to the dogs. The dogs do love chicken feet. In that one day, Chuck and Sue’s two dogs ate a grand total of thirteen and a half chicken feet, roughly.  At this point, you must yank gently on the crop right inside the neck. It must be removed from the lining in the throat so it can be pulled out the rear. Here is the fun part: the triangle butt cut. Cut a triangle directly underneath the tail of the chicken and remove the flesh. At this point it’s time to just plunge your arm into the chicken’s rumpus. I’ll never forget the feeling of all its hot, steaming organs sliding all over my hand as I try to get a good enough grip to pull out its guts. One of the more satisfying moments of the experience was pulling those guts out in one clean, swift motion. I felt like my chicken cleaning efficiency was really getting to new levels.

It was a truly enlightening experience that transcended the senses. Similar to how a day on the water makes your brain feel kind of wavy at the end of the day, or how a day riding rollercoasters gives that sensation that lingers through the night, I sensed the warmth and slime of chicken guts on my hand and forearm long after I had cleaned up from the mess.