The Plight of Producers

Food movements are a staple of modern sustainable lifestyles, but many of these movements focus on the consumers. What about the people who work to produce the food in America? In many cases, the producers in America, whether farmers or farmworkers, suffer abuse and remain overlooked in an industrial, profit, and efficiency-focused agricultural system.

Many American consumers do not know a single person who works to produce food. This disconnect between consumers and producers is a direct result of an industrial agriculture system. Food processors and retailers have created an opaque system that confuses consumers, controls farmers, and concentrates the profits in large corporations (1). As a result, farmers now suffer through a loss of independence, poor health, and large sums of debt, while consumers remain largely unaware (2). 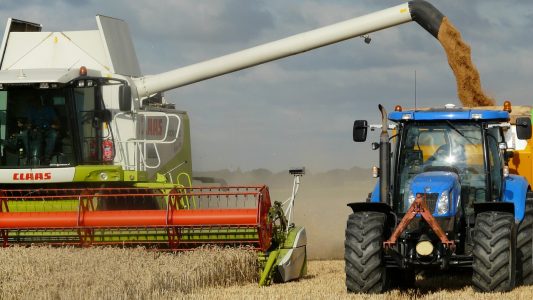 A farmer brings in the harvest.

In the past, farmers have been seen as independent and connected to the land. However, this image of farming is not the reality many growers and rural Americans face today. Instead, growers languish in a state of constant debt, so Americans can enjoy low food costs and large spectrums of choices. In order to remain competitive, producers must become more efficient in growing a single crop through the use of fertilizers, genetically modified seeds, and pesticides. These technologies are expensive investments for producers, but are seen as the only chance at making a profit. As farmers work to produce more crops with increasing efficiency, the supply increases; therefore, the price of the crop drops each year, making food cheaper, and leaving farmers without enough profit to pay off their investments (2).

Food processing companies enter into contracts with individual farmers, in order to control the prices of the goods and the image that reaches consumers in America. This system of contract farming creates the cycle of debt previously described, and hides this from the consumers (3). The cycle of debt causes increasing rates of anxiety, depression, suicide, and isolation among farmers. Paradoxically, many of the people that earn a living producing our food, do not always have enough money to feed themselves (2).

Though the problems farmers face are large, systemic, and have many consequences, there are solutions we can work towards. Reviving local farming and rural communities are the best ways to end the injustices caused by contract farming. This revival is called “civic agriculture” because it drives community building, local economics, and local food systems, in which the farmers and the consumers are directly connected. This also empowers communities to take charge of how their food system works and who it works for. Furthermore, civic agriculture ties the success of the rural community to the success of the farmers who live there, which in turn helps raise the standard of living for all community members. Lastly, civic agriculture does not solely focus on profit and efficiency. Instead, the social health, economic health, and environmental health are all woven into the fabric of the local food system (3). When local food is created in a healthy way, the community will be healthy.

As the food system becomes more localized, the national supply chain becomes more sustainable. Currently, the United States faces a state of regional, agricultural districts that specialize production, such as the dairy monopoly in the Great Lakes region. Then, these products are shipped across the country by ways of convoluted supply chains. This model requires extreme interdependence and renders most regions of the US unable to sustain the population, if the food system was disrupted. Civic agriculture at the local level would create independence and self-sustainability on a larger scale as well (3).

As an urban consumer, connecting with the person who produces your food is one of the most important ways to change the food system. Knowing your farmer through shopping at farmers markets and local stores or joining a community supported agriculture (CSA) program are the best ways to use your influence as a consumer to shape the food system. Not only will you benefit from fresh and local foods, but you will also gain relationships and become a part of the food community in your area.

Farmers are not the only group of people suffering abuse in the industrial agriculture system. Modern agriculture has forced farmworkers to endure oppression, low wages, and unjust treatment throughout history. Many immigrant groups have found jobs as farmworkers in America. They spend twelve-hour workdays in the fields, picking the produce that ultimately ends up in the homes of American consumers. Farmworkers face unacceptable work environments, discrimination, and unfair wages.  In the documentary, “Food Chains,” workers are seen earning one token per bucket of tomatoes picked, while being doused in pesticides blowing from a nearby field. At the end of the long workday, the farmworkers redeemed their tokens, earning about $40 for 4,000 pounds of tomatoes harvested (4). 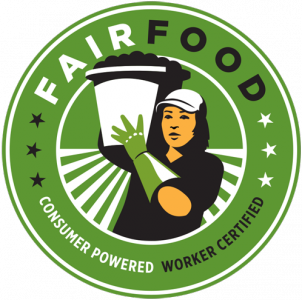 The industrial agriculture system pays much less than the cost of production for commodities, leading to these low wages for farmworkers. The food retailers control much of the market price of commodities, like tomatoes. Many supermarkets and fast food chains could pay only pennies more per pound of tomatoes and double the wage for a farmworker. This slight price increase has been calculated to cost a family of four only 44 cents more per year for tomatoes (4). The exploitation of immigrant farmworkers is evidence that the current system of agriculture is not stable. The workers at the bottom of the supply chain are exploited by the profit driven food retailers at the top.

The inherent injustice of the system has led to multiple farmworker justice movements, most notably the movement in California led by Cesar Chavez in the 1960s and the current ongoing movement among tomato workers in Florida. Chavez started the first farm worker union and earned unprecedented increases in wages for farmworkers in California (4). The current movement is led by the Coalition of Immokalee Workers (CIW) to gain wage increases for Florida tomato pickers. Large supermarkets and fast food chains buy many of the tomatoes produced by these workers. The leaders of CIW recognize the power to raise wages lies among those that control these large corporations; therefore, they began to protest and target these corporations for fair trade practices and higher prices for the tomatoes. Many of these campaigns were successful in persuading companies like Taco Bell and Walmart to sign on. However, other companies, including Publix and Wendy’s, still refuse to pay more for the tomatoes, claiming that this is not their problem to fix. In fact, Wendy’s began sourcing even lower cost tomatoes from Mexico in order to avoid signing onto the fair labor agreement (5).

Farmworkers provide much of the food we eat in America and should be paid for the hard work they do every day. In order to ensure farmworkers receive fair wages and safe work environments, consumers must join in the fight for justice. CIW and the Fair Food Program always have campaigns happening that you can join right now. As you are shopping, you can vote with your money by looking for the Fair Food Program label or shopping at any of the retailers and farms that have signed onto the Fair Food Program agreement. Lastly, you can join others around the country in boycotting Wendy’s in order to send the message that exploiting workers is not acceptable. In order to create a more just, transparent, and environmentally-friendly food system, we must demand change from these companies. As a consumer, you can help bring justice to farmers and farmworkers in America through conscious buying and awareness of the issues they face.