The Chattahoochee: More Than Just a River

Home » Blog » The Chattahoochee: More Than Just a River

In the southern Blue Ridge Mountains of eastern Georgia, we begin our 430-mile long journey down the Chattahoochee River. We’ll travel westward through Atlanta and then south to straddle the Alabama/Georgia border until eventually we meet up with the Flint river and several other tributaries that come together to form the Apalachicola River that will carry us on into the Florida panhandle. 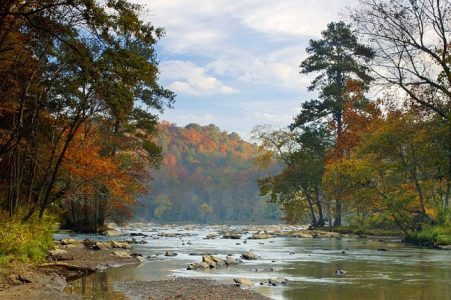 View of the Chattahoochee in autumn. Source: https://www.doi.gov/news/photos/Photos-Chattahoochee-River

Since as early as 1000 B.C. people have made their homes and their lives alongside the Chattahoochee. From the ancient Kilomoki ruins, to the spiritual Creek Indian encampments that would eventually be conquered by white settlers, the Chattahoochee has been a food source, a transportation route, a means of spiritual connection for different cultures of people for centuries, and even an inspiration for art and poetry (see Sidney Lanier’s Song of the Chattahoochee). Beginning in the early 1800s, King Cotton sailed his royal route from the port town of Apalachicola to wharves scattered upstream, eventually arriving in the prosperous market-town of Columbus. Of course when Confederate troops realized their “War for Southern Independence” was drawing to an unfavorable close, they sought to defend the Chattahoochee from Union troops no matter the cost. In the aftermath of the war, steamboats and passenger boats took hold on the watery highway until about the end of WWI, when having been replaced by roads and rail for transportation, the river began its role as a provider of hydroelectric power. (More details on the history of the Chattahoochee can be found here.)

Today, the Chattahoochee is most known for the complicated tri-state dispute over water usage rights between Florida, Alabama, and Georgia. The river is the most heavily relied upon drinking water resource in Georgia, with Florida and Alabama arguing that Georgia uses too much water from the river. Additionally, the historical desire of people to build their cities near the river comes with a cost: modern cities consist of mostly impervious surfaces and large sewer infrastructures, which together wash pollutants to the river after a heavy rain, resulting in elevated bacteria levels. One way to combat this is to advocate for usage of more porous infrastructure materials in local cities.

Thankfully, other than after heavy rains, the river is completely clean and safe to swim in and provides a wealth of opportunities for those seeking outdoor recreation. For example, the National Park Service owns and operates the Chattahoochee River National Recreation Area, hugging 48 miles of river northeast of Atlanta where visitors can raft, canoe, kayak, or operate small boats. They can also enjoy over seven miles of cycling trails, as well as fishing or educational services.

Closer to the Plains, however, is the city of Columbus, Georgia, which once was a bustling cotton-market city. 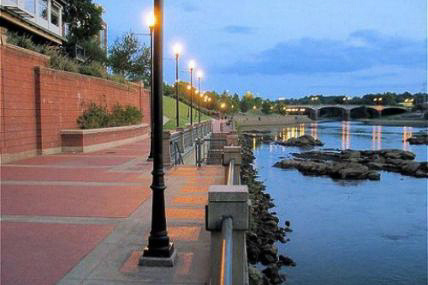 Only a 45-minute drive from Auburn, Columbus has many recreational opportunities to offer including a 15-mile Riverwalk “linear park” that hugs the river where one can walk, ride a bike, or fish off the pier. Don’t own a bike? There is a shop right on the Riverwalk where visitors can rent all bikes, kayaks, stand-up paddleboards and more. If you’re looking for a little more adventure, the Blue Heron 1200-feet zip line is the only zip line in the nation to cross a state line or you can get more familiar with the river by white water rafting with WhiteWater Express. If you’re not the outdoorsy type or if it’s too hot out for an outdoor excursion, check out Uptown Columbus for local dining, shopping, or exploring.

The next time you’re bored in Auburn, go check out this majestic river and see for yourself why for centuries people have built their cities on it, been inspired by it, and even been willing to risk their lives for it. You won’t be disappointed.