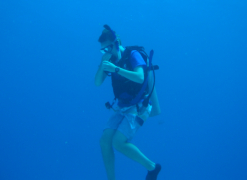 Matt on one of his many scuba diving adventures.

Born in Florida and having ten years of scuba diving experience, it’s no wonder Matthew Preisser developed a love for the outdoors. His firsthand knowledge of the polluted water and dying wildlife in our oceans also began an interest in sustainability; specifically, how these dirty conditions could be cleaned up and restored by nature to a healthy state. Matt’s passion for the environment led him to become involved with the Newport Aquarium in Northern Kentucky where he started volunteering during his sophomore year of high school. This was the first of many ways Matt acted on his concern for protecting marine environments in an overall effort to live more sustainably. A few years have passed and Matt now attends Auburn University where he is a junior in Biosystems Engineering with minors in German and Sustainability.

After coming to Auburn, Matt’s interest and involvement in sustainability only grew. He directly applies his commitment through his internship with the campus Office of Sustainability. Matt believes resistance to new ideas, often caused by lack of knowledge, can greatly inhibit sustainability initiatives on a college campus. However, he works to combat challenges like these, serving as an example in his efforts to bring about positive changes. Last year, Matt designed and created an online sustainability map of Auburn University’s campus, which helped raise awareness of the buildings, programs, and resources exhibiting sustainability right here in the area. This project, along with other work done by the office, increases acceptance and appreciation for new ideas rooted in sustainability principles. Going into his second year as an intern, Matt is very excited to continue making a difference on campus through his work. 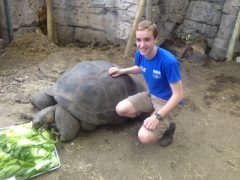 Matt hard at work at the Newport Aquarium.

Matt’s long-held love of the coast also led him to an internship this summer with the Department of Energy’s Pacific Northwest National Laboratory in Seattle. There he worked to research the environmental possibilities of renewable energy; specifically doing a geolocation analysis to determine future markets for marine energy production. Matt looked at both offshore wind and underwater turbines as technologies that work well in Seattle due to its proximity to the Pacific Ocean.

This position is similar to what Matt hopes to find in a full-time career upon graduating Auburn. He plans to go to graduate school to continue environmental impacts research. Ideally, Matt wants to live near the coast and follow his interests by working to further increase health and sustainability of marine environments. From his experience at Pacific Northwest this summer, Matt learned that renewable energy production is an emerging market, which must be adapted to each specific area for maximum efficiency and success. 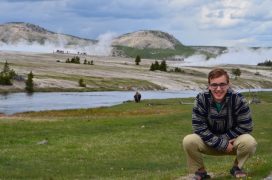 Matt made sure to visit Yellowstone National Park on his way to Seattle for his internship.

While ocean-based energy production wouldn’t be the most effective approach in Auburn due to the inland geographic location, there are still viable options for renewable energy in Alabama and many great ways people can live more sustainably in the local community. Matt thinks one of the most important steps towards a more sustainable life is integrating respect into daily thoughts and actions. Respect for nature, respect for other people, and respect for the world in which we all live. As a college student, he says the principles of sustainability can be applied in a myriad of ways. While Auburn offers student organizations directly focused on aspects of sustainability, Matt believes the ideas can be incorporated into many other organizations as well. He advises other students wanting to get involved with sustainability to find something they’re passionate about like a club, a team, or an activity, and make that more sustainable. Matt sets an example of what it looks like to be more conscientious about sustainability and to make choices with intention.  If we all do this, our combined efforts will go a long way towards improving our community at Auburn and the world.