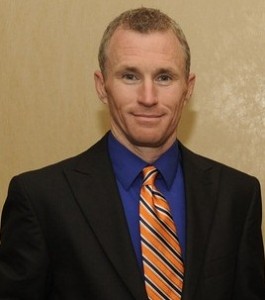 Over the past decade, anthropogenic climate change has garnered huge amounts of attention, and for good reason. As average global temperatures increase, so does the number of people working to adapt to unavoidable changes and prevent the worst from happening.  Trey McDonald, Auburn alumnus, 2014 Spirit of Sustainability Award winner, and Sustainability Coordinator at the University of North Carolina Greensboro, is one of these people.

Trey grew up just outside of Baton Rouge, Louisiana, and decided to leave the area for college, entering Auburn as a pre-medicine/microbiology major and varsity swimmer. After exploring a few majors, he graduated with a degree in Marine Biology in 1990. Trey almost immediately entered the environmental field, working as a whale biologist and outdoor education instructor. He primarily focused on the environment until he moved to Florida for a position as an environmental scientist and noticed the pace and scale of development in the state.

This observation piqued Trey’s interest in finding ways to develop in a more responsible way or, in some cases, avoid development entirely for the sake of environmental stewardship. It also led to the shift of his career focus from the environment to sustainability. Trey earned a Leadership in Energy & Environmental Design (LEED) accreditation in 2006 and a MS in Environmental Science and Policy from the University of South Florida in 2008, the focus of his studies being sustainability on university campuses with USF as a case study.

In 2009, Trey was hired at the University of Richmond as its first Sustainability Coordinator. There he led the development of their Climate Action Plan and laid the foundation for the university’s Office of Sustainability. In April 2010, Trey made the move to the University of North Carolina at Greensboro (UNCG) to be its first full-time Sustainability Coordinator. Working in operations, his primary responsibility is to move UNCG toward climate neutrality. To this end, he led a team of over 50 faculty, staff, and students to create the UNCG Climate Action Plan. The plan outlines a strategy for achieving climate neutrality on campus by 2050, and was approved by the UNCG Chancellor and Executive Staff in 2013.

In addition to this achievement, Trey started the University’s Energy Conservation Teams, the Vampire Energy “Slayers,” a campus community garden, a Green Office program, and environmentally preferred purchasing guidelines. He also co-teaches two courses, including Intro to Sustainability Studies. This is the result of a strong partnership between Trey and UNCG’s Academic Sustainability Coordinator, Dr. Aaron Allen. Together they have prioritized bridging the gap between academics and operations and using the campus as a “living laboratory”, whereby students and faculty members alike have opportunities for learning about sustainability through experience.

Out of all his achievements, Trey is the most proud of a program his office put together in fall 2014. Sustainability Office intern, T’shari White, led the creation of an event to have a conversation about minority voices and environmental issues. The sustainability movement has been focused in relatively affluent white circles, and Trey has long seen a need to change that.

He said it was particularly important at UNCG, as the most diverse campus in the UNC system. The “What’s Green Got to Do with It?” event brought attention to minority students’ lack of participation in the UNCG Environmental Studies Program and campus sustainability issues with a student panel, Greensboro environmental justice speakers, and Career Services representatives. With over 100 students in attendance, the discussion was a huge success, and Trey hopes it will only grow from there.

The greatest challenge Trey faces in his day-to-day job is the question of how to make people realize the importance of climate action. He says that people seem to understand that climate change is a problem, but not one that affects them because it appears far removed in space and time. Furthermore, many see it as only an environmental issue, and not one that will also impact our societies and economies. The best way he has found to combat this disconnect is by putting a human face on the issue and showing how current industrial practices create environmental damage and inequities for people around the world.

Trey asserts that the biggest obstacle to action is, again, the mistaken perception of a distance between people and the problem in both time and space. While humans are great at being reactive, being proactive is a bit more demanding, especially when most of us are just trying to make it through the day. Intensifying the difficulty is the ubiquitous idea that current standards of living are rights, not privileges, and anything that calls that into question is a threat. This has led to the vilification of science and a general inclination to listen to politicians representing vested interests rather than those who have dedicated decades to researching the issue. Trey calls for us to move past the rhetoric, accept the science, and work towards solutions.

He says that no single person or action is going to stop climate change or the problems it causes. It’s a massive issue with myriad contributing factors, and that can be overwhelming and even paralyzing to well-intentioned people. The bright side of this is that with so many contributing factors, anyone can find a way to help that’s interesting to them.  While technological innovations such as renewable energy may seem more exciting, he suggests that the first step to making any change is reducing waste: not just trash, but energy, money, water, and all other resources as well. Although these may not seem like “sexy” options, any steps we take to preserve our planet are pretty attractive and worthwhile.