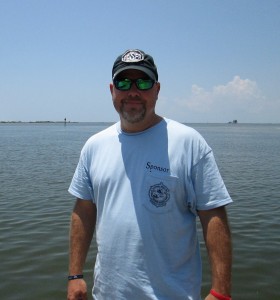 The Auburn spirit is something so infectious that it’s almost inevitable to be captured by it once you’ve experienced it first-hand.  Growing up in Easley, South Carolina among a sea of Clemson fans, Michael Freeman became a War Eagle Auburn man after attending the 1989 Iron Bowl during his senior year of high school.

Situated near Lake Hartwell, Easley was the perfect place for Michael to grow up exploring nature and enjoying the water, from which sprang his love of the natural world and feeling a sense of responsibility for people and the planet.

His interest in sustainability – and hatred of litter, he joked – was inspired by his grandfather’s mandate to pick up trash and collect recyclables for money to spend at the lake on vacations. This experience and his first Iron Bowl led him on a long and winding path that eventually resulted in his decision to apply for a job with the Auburn University Department of Risk Management and Safety.

Throughout Michael’s childhood his father worked for an airline, allowing their family to live comfortably in the middle class. Late in Michael’s high school career though, misfortune struck and the airline was bought out causing his father to lose his job. Compelled to seek another way to pay for his education, Michael decided to serve in the Army for four years. Once enrolled at Auburn, he majored in Health Administration and minored in Communications to pursue his lifelong passion for serving others. Upon graduating, Michael returned to Easley to explore potential career paths before settling down.

Michael had a variety of career experiences, each one informing and preparing for the next step in his professional development.  He served as a policeman before working with Anderson County Emergency Medical Services for six years, at one point returning to school for his paramedic license. He enjoyed spending time on clinical work far more than administrative duties, which led to several years of employment as a paramedic supervisor and as the critical care unit manager at a local hospital. While working for Easley Parks and Recreation he secured funding to help build a 122-acre recreational facility with sports fields and nature walking trails.  That work, which led to other beautification projects, helped Michael realize how much he enjoyed working to preserve and protect the environment.

While working for Anderson County Michael volunteered to become a member of the Hazardous Materials (Hazmat) team. There, he cultivated skills related to hazmat disposal and environmental testing, and when a position with Auburn’s Environmental Programs opened in 2005 he jumped at the opportunity to return to the Plains. When he started working at Auburn, Michael was dealing primarily with hazardous materials, blending his human health positions with environmental protection and restoration. Over the past nine years he has been able to cultivate and grow his skills, earning certification as a water quality monitor, getting involved with groups such as Alabama Water Watch, and working with the US Coast Guard on environmental protection and maritime security.

So far, Michael’s favorite part of his work has been the freedom to be involved and collaborate with groups both on and off campus to promote sustainability, environmental protection, and recycling. He’s most proud of seeing the difference his work has made.

He says that he has personally witnessed a shift in the broader mindset regarding sustainability, as evidenced by Parkerson Mill Creek restoration efforts and changes in best management practices for chemical waste.

Now his greatest goals are to help sustainability gain momentum on campus and to leave a legacy through leading by example. He says to achieve this, a person first must overcome the hurdle that a lack of awareness and understanding presents.  By promoting a culture of understanding and appreciation for how and why sustainability is relevant, we can create meaningful progress.

Michael believes an effective approach is meeting people where they are and encouraging them to start small, discovering and learning about their niche in the movement. Additionally, it helps to focus on the positives of the movement, while illustrating the fact that resources aren’t everlasting and new ways of doing things are needed.

In closing, Michael recommends that everyone start where they stand and look within themselves to determine their interests and opportunities. He encourages people to engage in educating themselves and seeking out information about sustainability. Finally, he asks that everyone take the time to comprehend what sustainability is all about, so that we can do our best to be a more sustainable university, state, and country, and lead the world as a “shining city on a hill.”