Sushil Bhavnani has been an advocate for sustainability at Auburn University for more than 25 years in his role as the Henry M. Burt Chair in Mechanical Engineering researching renewable energy resources. Sushil describes himself and his accomplishments modestly, saying he hopes students take away valuable information from his teachings. The significance of his contributions to sustainability, however, are not as modest as the man himself. Sushil is revered as a professor who teaches subjects that expose common misconceptions about what it will take to move to renewable energy; for example, that changes made by individuals will sufficiently reduce the world’s fossil fuel dependency, when in fact it will require industries to make changes in their practices to reduce fossil fuel dependency drastically. According to Sushil, changing these misconceptions is of vital importance to the future of our world.

Sushil began his life-long pursuit of creating a more sustainable world in his graduate research at the Indian Institute of Technology in Delhi, India, where he researched the development of solar-powered cold storage units to store food in developing nations. The unit Sushil created was used to store produce at remote harvesting locations before being transported to larger population centers. The combination of Sushil’s experience in engineering technology and his desire to help others gives him credibility and a certain charisma that students appreciate. 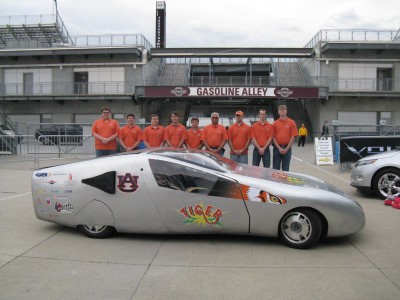 Dr. Sushil Bhavnani (fourth from right) with the TIGER car and student design team at the Indianapolis Motor Speedway.

Sushil’s co-curricular engagement with students in his specialty of renewable energy sources is also substantial. Sushil and a group of Auburn engineering students and faculty successfully built a solar/ biofuel hybrid commuter car called TIGER. TIGER’s success proved that the average American can make a daily commute of 50 miles or less without any dependence on fossil fuels. Sushil also was instrumental in building a solar house that competed in the United States Department of Energy’s Solar Decathlon.  According to Sushil, we should focus on improving high leverage practices in areas that would most drastically reduce fossil fuel consumption, such as transportation and electricity generation.

Sushil’s driven commitment to sustainable living is making a lasting impact at Auburn University. His engagement with students and his engineering expertise make his actions in sustainability something that, if carried on through his students, could result in the next generation relying on renewable resources for our daily needs instead of fossil fuels.