When I was 12 years old, I campaigned door to door for my father who was running for Oneonta City Council. This was one of those experiences as a child that made a lasting impression on me, partly because I was bitten by a dog, but mostly because he won the election. He went on to be a city councilor for 13 years making a difference in many ways for our community. 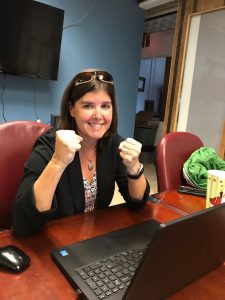 I guess one would say that being active in my community comes naturally to me. It is these early experiences that probably explain why my Wildlife Science degree from Auburn turned into a career in environmental advocacy rather than in wildlife management, but I realize that everyone’s childhood was not like mine when it comes to civic engagement. Many people have a negative view of what it means to be an activist or active in government and politics. I have heard all the reasons in my line of work – it’s too divisive, I don’t know enough, it won’t do any good.

When it comes to our environment, there is an urgent need for more people to become active. The job of ensuring that our water and air are healthy and that our planet is sustained for future generations calls on each of us to find ways to get involved in the decisions being made at all levels of government.

We must rethink our view of activism. Being active in government doesn’t have to mean being controversial or participating in civil disobedience. Those are important tools, but activism can simply mean being engaged, staying informed, talking to your elected officials, and — definitely voting.

When the only people talking to our legislators are the lobbyists and special interest groups, then divisiveness is inevitable. These particular people are paid to represent a specific position, but when real people – students, teachers, parents, concerned individuals – with all of our varied perspectives and experiences get involved, then the gaps between those entrenched positions begin to fill.

You don’t have to have studied political science or public policy to talk to elected officials. They are regular people — like you and me. They just need to know what you care about. Your voice and your vote do make a difference!

There is no time like the present to rethink and to decide to become more active in the issues you care about. This is a big election year in Alabama. The people running for office today will be the ones casting votes on important issues about clean water and a sustainable environment tomorrow. Make sure you know who they are and what they stand for. Talk to them about the issues you care about during the election.

Maybe your past didn’t lead to you the path of activism, but I hope the fate of your future will. You can stay engaged with issues about water by signing up for the Alabama Rivers Alliance email list and following us on social media. You can stay informed about candidates’ views on the environment by following Conservation Alabama and the Sierra Club Alabama Chapter who will both be doing candidate surveys in the coming months.