Out of Many, One

By adminSeptember 28, 2016No Comments 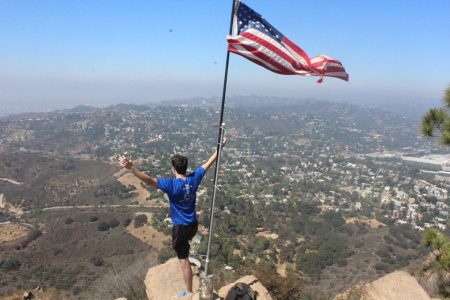 Ben Jones celebrating with a view.

In the United States of America, one of our mottos is ‘E Pluribus Unum.’ It means ‘Out of many, one.’ When I think of citizenship, I often contemplate this phrase. I have worked on five political campaigns, and seen all corners of our nation. The memory that has stuck with me was on a warm 4th of July, in Winston-Salem, North Carolina. I stood on the outskirts of a sizable group of all ages, races, and languages, clipboard in hand, with voter registration forms. These dedicated people were all becoming American citizens at a Naturalization ceremony. At the end of the ceremony, I had a man from Cuba approach me, excited at the chance to participate in democracy. A woman from Iran shook my hand and took a picture with me, happily signing up to vote for the first time as a United States’ citizen. Out of these many countries, a common sense of kinship spurned them to overcome insufferable hardships to move to our nation. I have never been prouder to be an American than that moment.

Complacency, however, does not make good citizens. We vote this cycle to tell the world that we are the moral example that they can strive towards, not a country ravaged by ignorance and indifference. Cynicism paralyzes progress, and our generation is counted out by those making decisions because we stay behind our computers, wary of involvement . We have a chance to seize the reigns of our own fates by casting our vote for one of several visions to move us forward. Citizenship requires action, so we must move forward together this November 8th as one nation, with 318 million opinions. We are a nation of immigrants, and the United States has adopted us as children of liberty. We are a people of a shared destiny, with infinite potential. Out of many, one.