By adminJanuary 8, 2019No Comments

With a new year comes a new opportunity to reflect on our impact on the world. For many, it’s a time to set a resolution to change a personal attribute. A recent trend I’ve seen is to choose a word or phrase to live by as a mantra guiding our decisions and actions. My favorite is the act of committing or recommitting to service. Inspired by, unarguably one of our greatest American leaders, many people decide to serve this month in commemoration of the Rev. Dr. Martin Luther King, Jr. 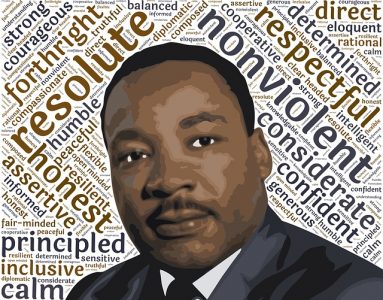 King modeled for us how to speak up against inequality; he inspired us to action and service; and he convicted us as a nation to seek justice. King championed ‘servant leadership’ before the term was coined by theorist Robert Greenleaf in the 70s and he was a profound example of the ways in which sustainability and leadership overlap. While many associate King with the Civil Rights Movement and the fight for racial equity, some forget the broad scope of what his leadership represented i.e. non-violent resistance, anti-war efforts, anti-poverty campaigns and economic reform etc. We also fail to highlight the varied approaches he utilized in the fight for liberation. He used his influences as a preacher, author, scholar, activist, and orator to demonstrate that anyone could lead and make a difference in their community.

Scholars identify three critical tenets to leadership; it should be ethical, process-oriented and relational. They teach that leadership is values based and moral reasoning; it is developed over time and the process is ongoing; and it is dependent on working for the benefit of and with others. So, what can we learn from King’s approaches on the application of leadership? Below are some related quotes from Rev. Dr. Martin Luther King to help guide your reflection.

“Change does not roll in on the wheels of inevitability, but comes through continuous struggle. And so we must straighten our backs and work for our freedom.” “The Death of Evil upon the Seashore”, 1956

“…we as a nation must undergo a radical revolution of values. We must rapidly begin the shift from a “thing-oriented” society to a “person-oriented” society. When machines and computers, profit motives and property rights are considered more important than people, the giant triplets of racism, materialism, and militarism are incapable of being conquered. – Address to Clergy and Laymen Concerned, 1967

“There comes a time when silence is betrayal” – Address to Clergy and Laymen Concerned, 1967

“But it is not enough for me to stand before you tonight and condemn riots. It would be morally irresponsible for me to do that without, at the same time, condemning the contingent, intolerable conditions that exist in our society. These conditions are the things that cause individuals to feel that they have no other alternative than to engage in violent rebellions to get attention. And I must say tonight that a riot is the language of the unheard. And what is it America has failed to hear?…It has failed to hear that the promises of freedom and justice have not been met.” – “The Other America”, 1968

I encouraged you to read these passages in their entirety to gain an understanding of the larger context in which he was speaking. King was calling people to action and service. He was charging us to think critically, respond ethically, persevere and fight for justice for all. I am reminded of an example from a college I worked at in upstate New York that proudly boasted about the time that King came to speak on campus. They would share what a bold move it was amidst such racial tension in America, and even though this was in what most assume is a progressive state, this particular part of the state was not. The way in which administrators, none of whom were there at the time, celebrated this part of the college’s history was not to detract from present day issues. Rather to remind the campus of the precedence set before them. They were willing to make a statement that pushed the needle forward for their students, staff, faculty, alumni and the surrounding community. Was that institution of higher education relieved from dealing with issues of bias or inequity? Certainly not! But there was a legacy, a duty, an expectation, that they would not be silent about these issues; that they would do what is necessary for the best interest of all members of their community; that they would not value perceived peace over the labor for justice.